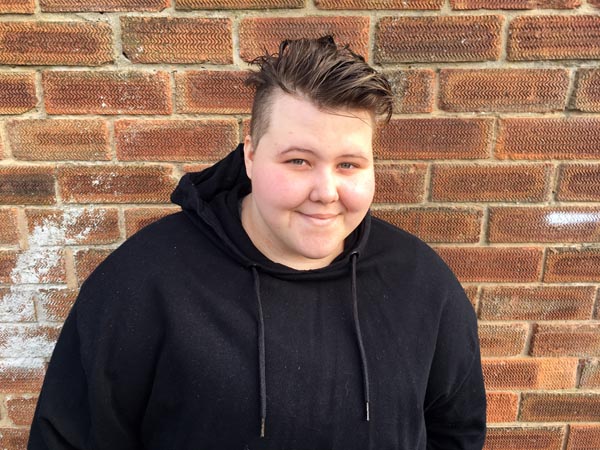 Jay Anderson, is the newest member of Newcastle Pride’s committee, where he will  undertake a new trans youth engagement role

A TRANSGENDER teen has teamed up with a popular LGBT festival in an attempt to make sure the event enjoys its most inclusive year to date.

Jay said: “I wanted to get involved with Newcastle Pride to give more of a voice to trans youth because it is a group that is often underrepresented in Pride parades.

“I think it’s really important for people to share their stories if they can because everyone has different experiences and there is no right or wrong way to be in the LGBT+ community.”

Since coming out as trans when he was 16, Jay feels lucky to have friends and family that provide a strong support system for his transition.

“Coming out wasn’t easy – even knowing I would be supported – but I never had the fear that I would be disowned or left without a home which is a real worry for many young trans people,” said Jay.

“LGBT+ youth homelessness is disproportionately high and so are suicide rates, especially among trans youth so it’s more important than ever that we stay tight as a community.”

Jay has been involved with campaigning for various mental health causes in the past and would like to incorporate this with his new role in Newcastle Pride.

He continued: “I want to help to show people that they are not alone and that there are resources out there if people know where to look.”

“We never turn away people who want to help out and it’s always good to get a fresh outlook,” said Stephen.

“We want Newcastle Pride to be as inclusive as possible because it is a space for everyone in the LGBT community and we are looking forward to working with Jay for input on the best ways to make young trans people feel included and welcome.”

Newcastle Pride takes place on July 20-22 at Nuns Moor, with a number of satellite events happening in the run up to the weekend. Alexandra Burke, S Club, Gareth Gates, Jack and Joel and Jordan Gray will be headlining the main stage in the new big top.