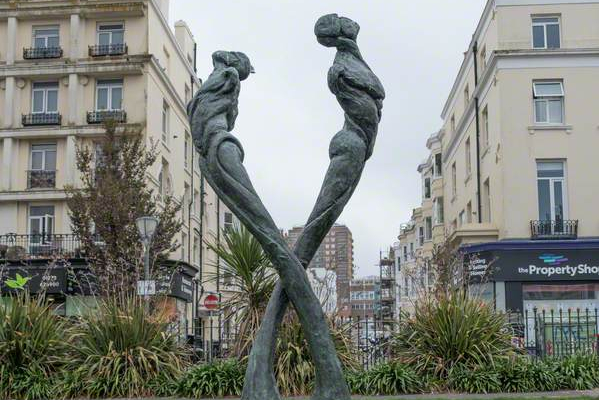 To commemorate the 10th anniversary of the AIDS memorial in Brighton, its sculptor Romany Mark Bruce, has produced an exclusive limited edition of ten smaller replicas that are 50cm high and made from aluminium resin.

The first edition will be auctioned at The Sussex Beacon’s annual Halloween fundraising event at The Grand Hotel on Thursday 31st October.

The second will be used to raise funds for the Rainbow Fund in memory of James Ledward.

The Brighton Rainbow Fund, founded by James, is the central hub for fundraising within the Brighton and Hove LGBTQ+ communities, and distributes grants to local projects which benefit the lives of hundreds of individuals within those communities.

Following the tragic death of James Ledward, Romany Mark Bruce said ‘In 2007 James Ledward invited me to submit a proposal for the AIDS Memorial. To be involved in the project was a great honour and privilege. It took over two years to complete and during that time James supported and encouraged me with humour and great kindness. He gave me the opportunity to remember my soulmate, Paul Tay, after whom it is named. For that I am truly indebted to James and his contribution to the LGBTQ community is immeasurable and one which should never be forgotten.’

Tickets for The Halloween Horror Show, which include a three-course meal and show, are £65 each and can be purchased via The Sussex Beacon on 01273 694222.