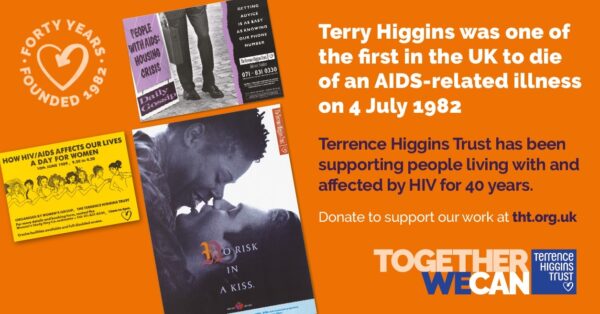 This World AIDS Day, together we can remember those we have lost, and how far we have come since the early days of the epidemic.

This year marks the 40th anniversary of the death of Terry Higgins, one of the first people to die of AIDS-related illnesses in the UK. His partners and friends founded Terrence Higgins Trust in his name in response to an emerging epidemic, and to provide life-saving information at a time when media and Government were stoking up fear and stigma.

Our charity was Europe’s first HIV support organisation to respond to the epidemic. Terrence Higgins Trust has been at the forefront of the fight against HIV ever since, pushing for better care and treatment for people living with HIV and challenging the stigma and discrimination against those affected by the virus.

Since 1982, we have been supporting people impacted by HIV. We’ve come a long way since volunteers and staff established the helpline, the Buddy scheme, counselling, legal advice and a hardship fund.

As the epidemic changed, so did our charity. In 2022 our work is very different – but still life-changing. Terrence Higgins Trust is the largest voluntary sector provider of HIV and sexual health services in the UK, running services out of local centres across Great Britain. Our helpline, THT Direct, provides vital support when people need it; it’s a lifeline that helps nearly 20,000 vulnerable people each year. We also support people living with HIV with a hardship fund, counselling, work support, and peer-to-peer support to come to terms with their diagnosis.

On World AIDS Day, it’s vital that we celebrate the tremendous progress around HIV that would have been unimaginable 40 years ago. People living with HIV who are on effective treatment can’t pass the virus on to others and can expect to live just as long as anyone else. PrEP, a tablet taken by HIV negative people before and after sex that greatly reduces the risk of getting HIV, is now available for free in England from sexual health clinics.

I wish Terry and all of those who are sadly no longer with us could have lived to have seen these advancements. It is in their honour that we still work to eradicate stigma – because people living with HIV deserve to thrive, not just survive. We will also do everything in our power to end new cases of HIV by 2030 as a tribute to those who shoulders we stand on.

Terrence Higgins Trust will always be there for people living with HIV. But we can’t do it alone and need your support now as much as ever. Play your part in tackling stigma by this World AIDS Day by educating others about all the progress we’ve made in the fight against HIV since the 1980s.

Together we can be there to support people impacted by HIV today, tomorrow and into the future

Today, tomorrow and into the future, together we can be there.