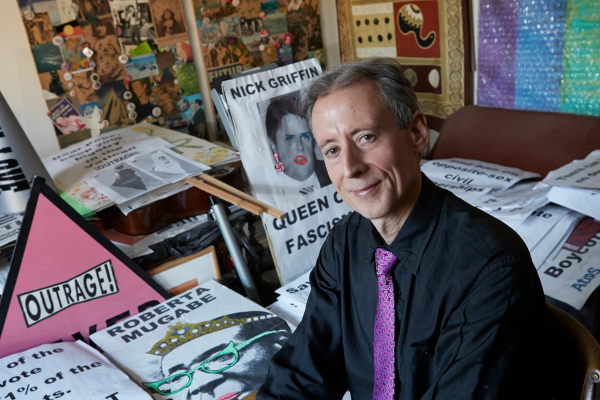 A lifelong LGBTQ+ activist and human rights campaigner, whose methods of achieving tangible life-changing results have divided opinion over the years, Peter Tatchell, who has recently created Reclaim Pride [an alternative to Pride in London] is now the subject of a Netflix documentary, Hating Peter Tatchell, which looks back at his remarkable life being at the forefront of the global fight for equality. Jason Reid put 10 questions to Peter Thatchell.

Congratulations on the documentary. How do you feel when you watch your life in activism back?

I’m amazed that I have achieved so much and for so long. And also astonished that I’ve survived such intense hatred and violence, simply for taking a stand for LGBTQ+ human rights. It was an honour to have the film executive produced by Elton John and David Furnish, and for Ian McKellen and Stephen Fry to feature in it.

In retrospect, if you could, would you have done anything differently?

I wish I had used outing more often to expose hypocrites and homophobes who were harming the LGBTQ+ community – and thereby pressured them to stop. On the rare occasion I did out people, it worked. After being named, none of the 10 Anglican bishops said anything homophobic and it prompted the Church to begin its first serious dialogue with the LGBTQ+ community.

In your opinion, what are the greatest challenges facing LGBTQ+ people today?

The government needs to stop dithering and promptly ban the unethical, harmful and ineffective practice of conversion therapy. It should allow trans self-ID via a statutory declaration. We have to stop the way some LGBTQ+ refugees are put in detention centres and given deportation orders. The LGBTQ+ movement needs to become more internationally focused, to support campaigners in the 70 countries that still criminalise homosexuality and the 11 nations that still have the death penalty.

What advice would you give to LGBTQ+ people and allies who wish to become involved in activism for the first time?

Join and donate to a LGBTQ+ campaign group, and lobby your MP on the aforementioned issues via the website www.writetothem.com. How do you define free speech and hate speech? Hate speech is abusive, insulting or threatening. Polite critical views are free speech. Bans and no-platforms don’t make bigoted ideas go away. It is more effective if they are protested and challenged with counter evidence to show why they are wrong. That’s how we changed public opinion on LGBTQ+ issues.

Why did you create Reclaim Pride, which took place for the first time last month?

Many people are fed up with how Pride in London has become too corporate and commercial. It never pushes for LGBTQ+ human rights. A coalition of LGBTQ+ groups, coordinated by my Peter Tatchell Foundation, organised a rival event: the first-ever Reclaim Pride march – a people’s Pride march for LGBTQ+ liberation. We marched from Parliament Square, protesting outside Downing Street and the Uganda High Commission en route. It finished in Hyde Park with a mass Queer Picnic, a DIY party in the park, with everyone bringing their own food, drink and music. It was a wonderful celebration and, crucially, a protest. We put LGBTQ+ human rights front and centre. I hope Reclaim Pride will become an annual event.

If there was a general election tomorrow, how would you vote and why?

I’d vote Green because I think they are the only party that takes the climate crisis seriously. If we don’t act soon, the UK will suffer hugely destructive floods, heatwaves and tornadoes. Plus Greens have the best policies for a fair society, including LGBT+ rights.

Which world leaders, in your opinion, represent the greatest hope for, and greatest threat to, the LGBTQ+ community globally?

Which queer person from history would you most like to have met and why?

Leonardo Da Vinci. He’s probably the greatest genius in human history: painter, sculptor, engineer, scientist and inventor. Centuries ahead of his time, he would have been an enlightening and inspiring person to know.

If you could only read one book, watch one film, and listen to one album for the rest of your life, what would you choose and why?

One film: Her (2013). It’s psychologically very deep and thought-provoking. I keep discovering new insights about the film, and myself, every time I watch it.

One album: Whitney Houston (1985). She has extraordinary vocals, with emotionally engaging and uplifting lyrics. I listen to it whenever I need a mental recharge.

Hating Peter Tatchell is out now on Netflix. www.petertatchellfoundation.org