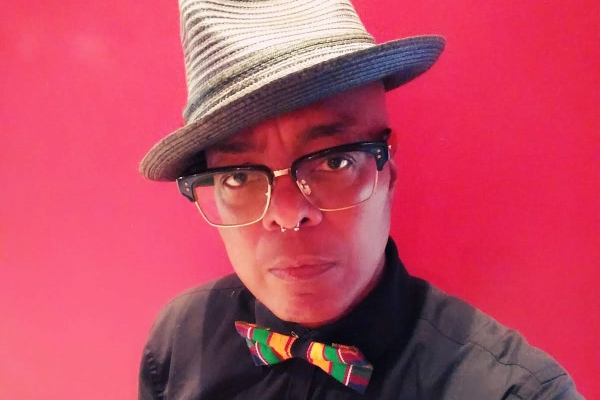 Campbell X is probably best known for his 2012 film Stud Life, which is a story of platonic friendship between Queer people with what he calls “ romance on the side.” It’s a typical throwaway comment – nonetheless the film is in The Guardian’s Top 10 Black British films.   It centres on a stud butch lesbian whose best friend is a gay man who becomes jealous when she gets a lesbian girlfriend.  He’s also the creator of Visible – a documentary as he says “ reclaiming Queer stories – including trans men, butch and non binary people ” It features queer/trans/intersex people of colour.

Asked how he works Campbell said: “ I draw energy from people around me who give me the courage to do the work – work about people who are brave enough to stand up for others. “

Campbell’s inspiration comes from performers like Mzz  Kimberley , who appeared in Stud Life “A Black trans woman who is an established UK actress, so we don’t only need to look to the USA for trans actresses.”

Another inspiration is Travis Alabanza – a femme trans  risk-taking performance artist , writer, activist – considered one of the most prominent emerging Queer artistic voices.  “ They have resilience despite systemic prejudices against them ,”  says Campbell.   Similarly Lynae Vanee – a Black  poet, educator, photographer  combining humour and politics. Jane Fonda too is on the list as an actress, activist, writer/producer who acknowledged her white privilege and applauded the Black Panthers and the LGBTQ+ rights movement and climate change protesters.

“ They all stood up and said : this is me – take it or leave it .” On the film-making process Campbell is clear: “ Film/finance takes a long time so you need passion – a burning desire to make the film – the best film possible,”

Campbell is also a big  fan of  Berto Pasuka , who was the co-founder of Ballet Negres in 1948.  A Black Queer Jamaican  dancer, choreographer, director, writer and painter  –  Campbell says: “ He was a Jamaican who was out in the 1940’s , which is something people can’t imagine . ” Campbell recommends Ballet Black – free to view here on BFI player,  it’s a documentary  about Pasuka’s dance company , made some 20 years after Berto’s death

What kind of stories does Campbell tell ? “ Stories about outsiders, weirdos , people who don’t fit in , people outside the status quo : stories of friendship, love, desire and intimacy ,” he says. “ I’m interested in how Queer people navigate their lives after they’ve come out . Coming out happens all through our lives – it’s not a one-time event. “

Just the act  of coming out is not the story he wants to tell.  “ There are gender/body issues – how do we fit in to the world outside of us ?”  The trauma we experience in our childhood is his interest  “ how do our formative years affect our lives, and how can we include them in our Black Queer stories?

Another work  – Different For Girls –   was  a mainstream tv look at  lesbian and gay people who have children – covering the challenge of forming families for LGBTQ+ people . The film clip he showed the event was of the pain of two women who have split up but where children are involved – it was compelling to view.

Campbell is proud that Stud Life – distributed by the marvellous  Peccadillo Pictures – has a  trans/queer cast and  crew – an important aspect  for the film-maker. Another vital strand of his message, he tell us is “ Your silence will not protect you.”

Campbell is vehement abut the structure of the film industry and how weighted it is. As far as film funding is concerned he’s clear: “ The puppet masters in film are not black. We think someone’s going to come and rescue us – and they’re not . We have to rescue ourselves as Queer and Black “.

And he also feels strongly “why aren’t we hearing our Black queer stories : why aren’t these stories being financed or commissioned in the UK?”

Set aside all these important issues, his quote of the session for me was “ Tik Tok and Instagram are very Queer – you just have to teach the algorithm what you’re looking for .” A light-hearted if true moment in a gripping insight into a fully committed Queer Black film maker.

Campbell is on the panel for a screening of the film and discussion: Beyond ‘There’s Always a Black Issue, Dear’ on 28th February 2021, more info here:

The Coast Is Queer sessions will hopefully be available online soon. Watch out on New Writing  South and Marlborough Productions sites .

Look out for my 3rd feature on the sessions featuring queer writer Jamie Windust.