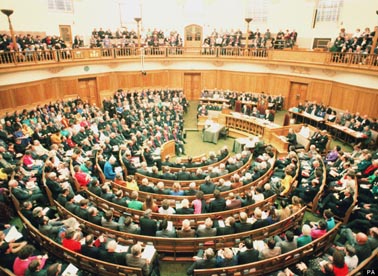 Tuesday 20th November 2012 is a date which will go down as a fateful day in the history of Christianity in this country.

The media headlines were all about the Church of England voting against women being allowed to become bishops.  But actually the ramifications of the no vote go far wider.

I sat through the entire Synod debate in Church House, Westminster.  It was a sobering experience.  The whole day was given over to this one issue: should the proposed legislation to admit women to the episcopate by passed or rejected?

Well over 100 speeches were made.  The motion was generally expected to be approved but as the afternoon wore on I became less and less certain that it would be. Just before lunch the incoming new Archbishop of Canterbury, Justin Welby, had spoken powerfully and cogently in favour. And just after lunch the outgoing Archbishop, Rowan Williams, made a really moving and impassioned plea for Synod to support the legislation.

But gradually the weight of opposition against it began to become clear as speaker after speaker got up to condemn it.

Synod is divided into three ‘houses’ : bishops, clergy, and laity.

The House of Bishops were overwhelmingly for, but even there some argued against  the measure, including our own Bishop of Chichester, Martin Warner.  The House of Clergy was also predominantly in favour but here too some spoke passionately against it.  But in the House of Laity there seemed to be a surprisingly large number of people anxious to get to the podium to vent their fervent disapproval of the proposed change.

How could this happen?

Basically it came about because of an unholy alliance between extremely conservative Anglo Catholics and extremely conservative Evangelicals.  This alliance is cynical and unholy because the two groups hold diametrically opposed views of almost everything else.  They only agree that women cannot be ordained, and they agree on this for totally different reasons.

The Anglo Catholics think that women cannot be priests (and therefore bishops) because Christ chose only males for his disciples.  This is not the place to go into the labyrinthine argumentation which this premise entails.  Suffice to say that the consequence is that it is for them impossible for a female to become a priest.  So putting a woman through an ordination ceremony is merely a charade: the magic can’t ‘work’, it just doesn’t ‘take’, you end up with a female in fancy dress.

The Conservative Evangelicals think that women should not be priests. They don’t believe in the catholic sacrament of ordination for men or women, but they do believe that women should never play leadership roles because of the God ordained ‘headship’ of males.  They think that in Genesis in the Old Testament, and in St Paul in the New Testament, God clearly sets men over women and so females should obey males and always be subject to male authority.  Letting women be priests and bishops therefore represents a grave act of disobedience to the (supposedly) clear teaching of the Bible.  It is abhorrent to God.

I imagine that some of you reading this might be open-mouthed at this point.  Even as I write this I shudder at how utterly alien all of this sounds to most modern ears.  But you need to know that significant numbers of your compatriots actually believe these things.  (Don’t forget this is also the position of the Roman Catholic Church and many non-Christian religions as well).

These arguments have been rehearsed again and again over the past two decades.  Until Tuesday the Church of England had arrived at a point where essentially the Anglo Catholic/Conservative Evangelical opposition had accepted that women bishops were an inevitability, and what they wanted was ‘proper provision’ for themselves to carry on with their anti-women’s ordination stance while remaining within the C of E.  The proposed legislation included provision for every diocese to set up a code of practice so that parishes which did not want to be subject to a woman bishop could request ‘alternative episcopal oversight’ i.e. be looked after by a male bishop.

And this is where we get a cruel twist. The unholy alliance did not think the provision in the proposed motion was sufficient.  But also, some supporters of women bishops felt it was far too generous, and if implemented would effectively relegate women to being second class bishops.  So some of them voted against it as well.

The rest is history as they say.  But the consequences are profound.  Suddenly vast numbers of ordinary people who have little or nothing to do with the church have become animated about this.  They have realised that we have a national church, and that this national church which is actually part of our national life is completely out of step with contemporary values and standards of human decency.

The consequences are far-reaching. The 26 seats in the House of Lords reserved for bishops are effectively reserved for males only, not now by tradition, but by deliberate vote. This is intolerable. Many ordinary people who thought nothing of it before are now scandalised by the idea of the ‘stained-glass ceiling’ which means only men can be promoted within the C of E hierarchy.  Questions have been asked in Parliament.  One wag said amusingly but correctly that our national ‘broad church’ had been destroyed by a few narrow minds.

And yet for those of us who are LGBT it may be good news.  Politicians are seriously reconsidering the exemptions given to the churches from equality legislation.  The driver will be gender equality but sexuality will be included with it.  The credibility of all our Christian enemies has been seriously weakened and they will find that in future when they spout their bile about the sinfulness of homosexuality nobody will listen to them.  Now that conservative Anglicans have overplayed their hand on the inferiority of women they have blown the cover of all conservative Christians.  The general public now see them now for what they are, and mostly they don’t like what they see. Nor I believe does the Carpenter of Nazareth.