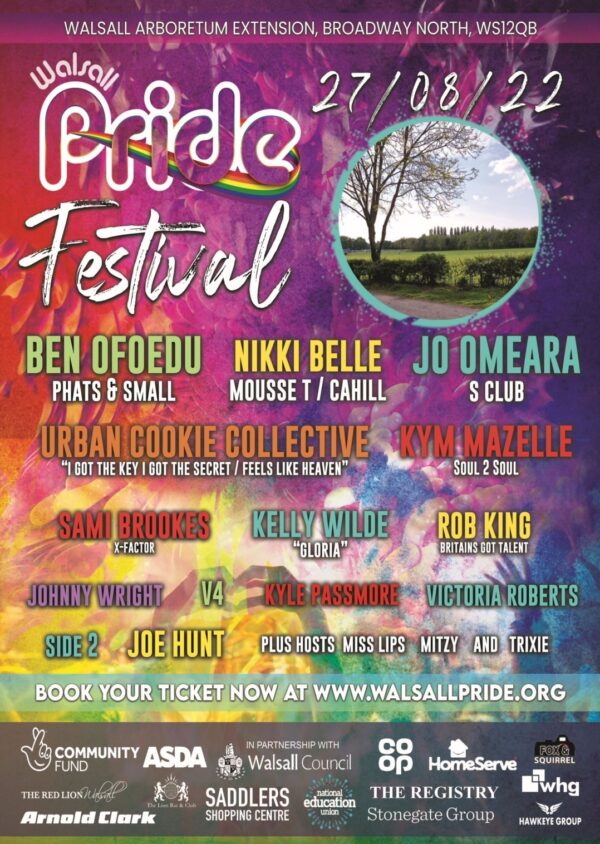 Walsall Pride will be held in 2022 on Saturday, August 27 in the Arboretum extension, with a main stage, dance arena, and cabaret stage. Plus, there will also be stalls, food vendors, licenced bars, and children’s rides and inflatables in the family area.

The line-up for the main stage, hosted by drag perfomers Miss Lips, Mitzy, and Trixie, includes:

Victoria Roberts – an established vocalist, entertainer, trained dancer and choreographer with several years’ experience in the business, performing her own cabaret shows both in the UK and overseas, touring in national theatre shows, pantomimes, cruises and resident in the West End.

Side 2 – a synth pop duo who perform hits from bands such as Yazoo, Pet Shop Boys, Erasure, OMD, and many more.

Jo O’Meara – best known as being a former member of S Club 7. Jo has recently released solo music too.

Rob King – a singer from Manchester who performed on Britain’s Got Talent and acted as a judge on BBC One’s Saturday night singing competition, All Together Now.

Johnny Wright – a singer from Blackpool who appeared on ITV’s The X Factor.

V4 – a local group who will tribute some of the top boybands.

Sami Brookes ­– who has performed on X-Factor.

Kyle Passmore – a singer and songwriter from Blackpool who was a contestant on BBC One’s Let it Shine.

Kelly Wilde – an Australian singer and international recording artist. She appeared on A Song For Europe with the song Better Be Good To Me to represent the UK in Eurovision. Kelly has also worked as the vocalist for many DJs appearing on club tracks such as Maria, Hero and Gloria.

Ben Ofoedu – a singer and composer who was formerly a member of Phats & Small.

Nikki Belle – a singer who featured on Cahill’s best-known single Trippin’ on You.

Urban Cookie Collective – a British Eurodance band who are best known for their 1993 hit single The Key: The Secret.

Kym Mazelle – an American singer who is often called The First Lady of House Music for pioneering house music in the UK and Europe.

Plus, announced so far on the line-up for the Cabaret Stage – which will be hosted by Cleo –the acts will include; Tanya Hyde, Pam Catz, Twiggy, and Linda Matthews, with more acts to be announced soon.

Keep up to date with all the acts and news via their Facebook and to buy tickets for the event, head to their website.