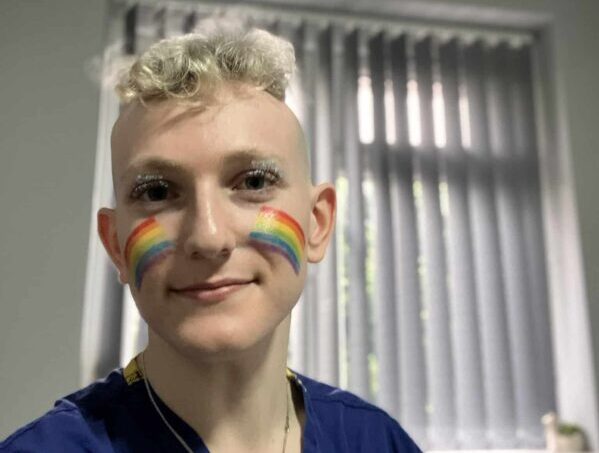 Raphael Kohn (20) was the target of a homophobic hate crime at Birmingham Pride following the parade on Saturday. Raphael, a third-year medical student at the University of Birmingham, was verbally abused by a man as he was heading home from Pride. The incident happened at a bus stop on St Martin’s Queensway at 3.30pm on Saturday, September 24, and a clip posted to Twitter shows the man hurling abusive words at Raphael, and threatening to punch him until several bystanders intervened.

“The people around me were amazingly kind and stood in his way to protect me, and accompanied me on the train home to ensure I got back safe. I have their contacts if the police decide to chase this up and need them as witnesses,” explained Raphael in a Tweet.

“I was at the bus stop waiting to go home,” Raphael told BirminghamLive, “and this guy came up to me angry there were no buses. He seemed pretty drunk and raised his hands like he was about to punch me.

“He was really aggressive and was shouting homophobic slurs at me. It was terrifying, my heart was going a million miles an hour. This happened in broad daylight. I remember he had the word ‘hate’ tattooed on the fingers of his left hand.

“I had two options at that moment – I could either run away or stick it out and not succumb to the homophobic pressure. I went with the second option – which was probably the stupid option in hindsight – but luckily, I’m physically unharmed. Even so, I get nervous just thinking about it. It makes me worry that Birmingham isn’t a safe place to be queer in.”

One of the bystanders who witnessed the hate crime called the police; however, by the time they arrived the man hurling the homophobic abuse had already gone. Raphael explained “I gave them the details but they just took a photo of the guy from my phone and didn’t want the video itself – it felt kind of dismissive, like they didn’t care.”

In response to this report of hate crime, West Midlands Police said: “We are investigating a hate crime, after a man was verbally abused during the Pride celebrations on Saturday, September 24. We will never accept or tolerate attacks on anyone simply for being who they are. Anyone with further information can contact us via Live Chat on our website quoting 20/828812/22.”

Despite being shaken by the incident, Raphael got home safely and declared that this “won’t let this ever stop me being fabulously gay. I won’t let him ruin my Pride. Pride is about saying no to these types of people – it’s about saying we will be proud of who we are despite them.

“So next year, I will be going back to Pride and I’ll be even gayer, I’ll wear more glitter and I won’t allow people like him to get in my way. This year’s theme was 25 years of Pride and Protest, and it’s both of those things.

“Pride is about celebration – the dancing, the colour, and the fun. But it’s also about the protest, and people like him show us why it needs to stay that way – don’t anyone dare tell me we don’t need Pride anymore.”