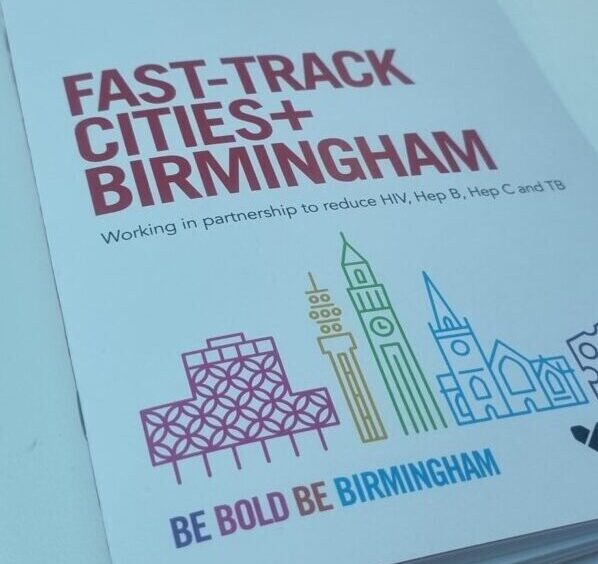 Saving Lives is a Birmingham-based national charity which aims “to reduce the stigma that still surrounds testing for the blood-borne viruses [BBVs] known as HIV and Hepatitis.” As well as focussing on other sexually transmitted infections. At the beginning of October, Dr Steve Taylor, Saving Lives’ Medical Director – and the Clinical Lead of the Birmingham’s Fast Track Cities+ (FTC+) programme – attended a signing ceremony which marked the beginning of a new phase in Birmingham’s approach to HIV.

“FTC+ is a global network of four hundred cities worldwide that are formally committed to achieving Sustainable Development Goal 3.3 – the ending of the epidemics of HIV and tuberculosis (TB) – as well as the World Health Organisation’s goal of eliminating Hepatitis B and Hepatitis C by 2030,” explains a press release from Saving Lives, which adds: “In addition, FTC+ cities commit to achieving zero HIV-, TB-, and hepatitis-related stigma.”

“It’s fantastic that Birmingham is joining the Global Fast Track Cities initiative,” said Dr Taylor. “This is a real opportunity for all stakeholders in Birmingham to come together with a unified target of ending new transmissions of HIV, Hepatitis B, Hepatitis C (The blood borne viruses) and TB infections by 2030.

“However, we can only do this if we act together, we need to bring together the NHS – both secondary and primary care – the city council, sexual health services, drugs and alcohol services, and the third sector all to work together.

“At Saving Lives, we have extensive outreach and delivery networks across the grassroots and medical institutions of the city – and we stand ready to do our part.”