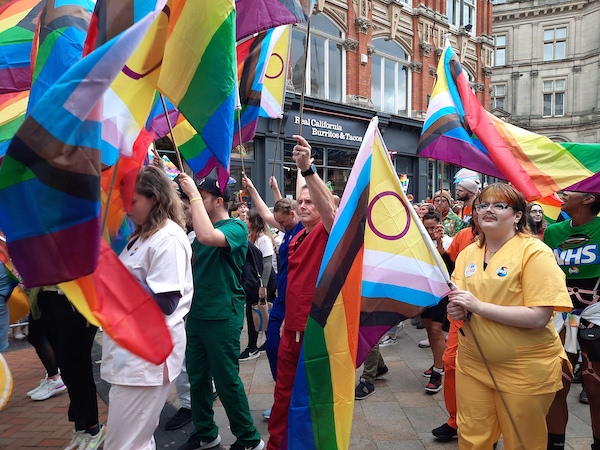 In 2022, Birmingham Pride celebrated its twenty-fifth anniversary, having begun back in 1997. Celebrating 25 years of Protest, Power and Pride, it was held over the weekend – from Friday, September 23 to Sunday, September 24 ­– hosting an array of events. Friday saw the return of the free community event for its second year, featuring local acts, street food stalls, and a candle lit vigil.

On Saturday, at midday, the Pride Parade left Centenary Square with Fatt Projects’ MOBILISE protest performance leading the way to the LGBTQ+ village; a reminder that at its heart, Pride is still a protest. MOBILISE celebrated the most marginalised within our community including fat, femme, Asian, Black, trans, and disabled queer people, declaring proudly that “our joy is political”.

Both the Community and Eden Stages could be accessed as part of the street party, which included community market stalls and access to the gay village’s bars. The Community Stage hosted a drag queen story hour for children, and a talented array of Birmingham’s performers, including: Alesha Tryed, Blü Romantic, Ashleigh Marc, Jay Andre, Jenna Davinci, Virgo Andromeda, Dahliah Rivers, Pork Pie, and many more. While the Eden Stage featured acts such as the D.E. Experience, and various drag performers.

For those looking for a sober space, Sober Pride made its return too with activities, performances, artists, speakers, DJ sets and more at Warehouse Café.

In 1997, roughly 15,000 visitors were attracted to Birmingham Pride. Twenty-five years later, over 8,000 participants took part in the parade alone, making it their biggest parade yet.