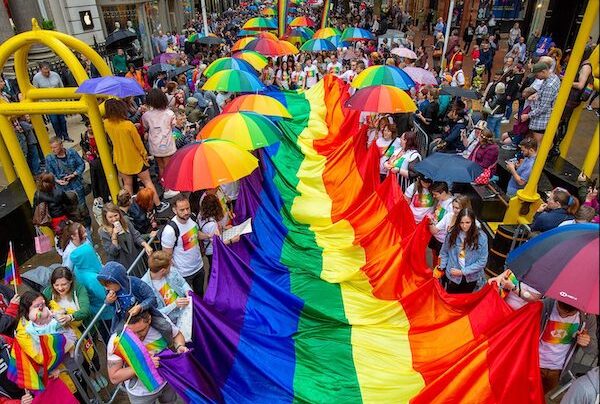 Lawrence Barton, Birmingham Pride‘s director, has backed a motion by Conservative councillors Gareth Moore and Adam Higgs, calling for a permanent home for Birmingham Pride within the city. First held in 1997, Birmingham Pride’s initial home was Hurst Street, home to the city’s LGBTQ+ venues; however, residential developments in the village have meant that this is no longer possible.

The annual festival attracts over 40,000 people, and Birmingham Pride 2021 and 2022 took place on the former Wholesale Market site adjacent to the Gay Village, called Smithfield. This new proposal states that it “would ensure that Birmingham Pride has a permanent home to secure its long-term future.”

Councillor Gareth Moore (Erdington), said: “For several years now I have been objecting to inappropriate planning applications in this area and calling on the council to introduce planning policies to help protect the Gay Village from the residential development that is encroaching on it.

“LGBTQ+ premises are under threat and we have sadly seen some premises close. The council has not done enough to support Birmingham Pride, local businesses and the LGBTQ+ community who call it ‘home’, and who have the right a safe space where they can be their true authentic selves without fear of intimidation.”

This proposal comes as an amendment to a motion before Birmingham City Council that calls for more to be done to tackle LGBTQ+ hate crimes in Birmingham, after “the community was once again rocked by a spate of homophobic attacks,” explained Councillor Adam Higgs (Highters Heath). The amendment also calls on the council to create a new event and outdoor space within the Gay Village following the successful pavement licensing trials during Covid-19 that helped the area thrive during the pandemic restrictions, and “to be a more inviting place for the LGBTQ+ community and our allies.”

Lawrence Barton explains: “Birmingham Pride has become so much to so many and being able to celebrate together as a community has never been so important.

“I welcome the call by Councillors Moore and Higgs for a permanent home for the Birmingham Pride festival and stand ready to work with the council to identify a suitable site… A home for the tens of thousands of people (the festival) welcomes to the city, year after year, is crucial to its survival.”