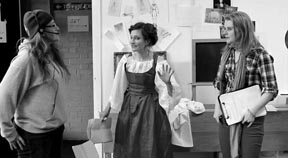 When Deborah Espect joined Twitter a few years ago, she started to follow a famous English actress who starred in a cult 80s lesbian film.

Deborah was shocked and ecstatic to see that, a few days later, the said actress was following her back. For days, she tried to find something interesting and witty to write, in order to grab her attention, but nothing worked.

When she eventually realised that this poor actress had better things to do than make new friendships over social networks, she reflected on the influence that those sites can have on poor innocent souls like hers.

She had turned into a, let’s be honest, bit of a stalker, and she didn’t like it one bit eventhough it was quite fun at the time! So she wrote a film about her experience.

Initially, she wasn’t going to be in it, but she thought it would add another layer to the story. The original actress read the script, and was very nice about it, but sadly she couldn’t take part.

She had watched Leisa Rea’s The Killing parody online, and as she knew someone who had worked with her before, she approached her.

She didn’t know her from Adam (or Twitter, for that matter), but she was a very good sport and said yes.

She altered the script to make it more relevant to her, and Writing a Film for Leisa Rea was born. And just so we’re clear: it’s all made up. All just a big joke. No comediennes were harmed in the making of it.