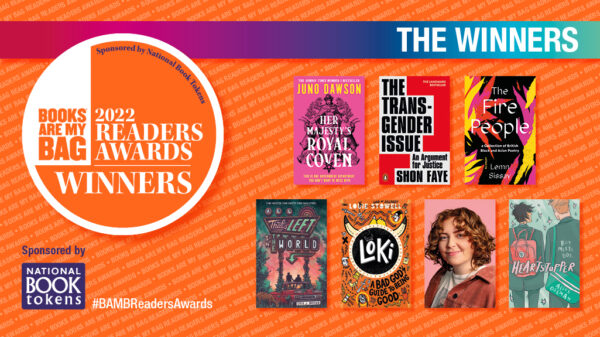 The winners of the Books Are My Bag Readers’ Awards were announced last night, Tuesday, November 8, at a ceremony at Foyles Charing Cross Road, London.

Hosted by award-winning novelist Liz Fenwick, the Books Are My Bag Readers Awards honoured the best books of the year, as selected by a judging panel of booksellers and voted for by readers.

Winning in the Readers’ Choice category, where the winner is crowned exclusively by readers, Alice Oseman took home an overwhelming number of votes for her young adult graphic novel Heartstopper. The book has sold over one million print copies and has been adapted for a Netflix series which came out in April 2022, receiving over 52.1 million views to date.

Alice, who also won the Breakthrough Author award, said: “Thank you so much everyone for voting for Heartstopper as the Readers’ Choice. Thank you to everyone who’s been involved in the journey of Heartstopper over the years. It’s been such an amazing year for Heartstopper, so this award really means a lot.”

In an exceptionally strong year for LGBTQ+ authors and books, The Transgender Issue by Shon Faye, a wide-ranging and multi-layered exploration at what it means to be transgender in modern Britain, won the Non-Fiction award. Juno Dawson’s Her Majesty’s Royal Coven, which follows a top-secret government department of witches, won the Fiction award.

Erik J. Brown’s atmospheric debut All That’s Left in the World, which blends a queer love story with a post-apocalyptic thriller took home the YA Fiction award. Lemn Sissay’s The Fire People, a collection of British Black and Asian Poetry, won in the Poetry category. The Children’s Fiction award went to Loki: A Bad God’s Guide To Being Good by Louie Stowell, the doddle-heavy diary of trickster god Loki, which was also Waterstones Children’s Book of the Month for February 2022.

“I had so much fun writing this book, and it means the world that readers are having as much fun reading it. I never expected a feminist fantasy novel exploring institutional transphobia to win any prizes, so this comes as a lovely, and welcome, surprise.”

Shon Faye, author of The Transgender Issue, which won the Non-Fiction, award, added: “This is not only a huge honour, but mirrors the entire trajectory of The Transgender Issue’s success in the UK. Its influence on the public conversation has been entirely due to the overwhelming support of booksellers and the enthusiasm of readers in a country where both the media and government have abjured their responsibilities to treat trans people with fairness, dignity and honesty.

“We are living in a bleak time for the protection of human rights in the UK. This award is such a meaningful endorsement of the book’s message which is even more needed now than when I was writing it nearly three years ago. I’m forever grateful to all the retailers and readers who continue to introduce the book’s discussion of trans liberation to others.”