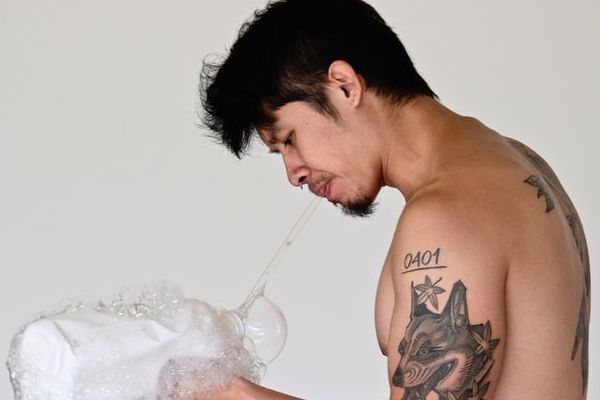 @Disturbance will be an extravaganza of a night of LGBTQ+ performance and video art at Bermondsey’s Ugly Duck. The event takes place both live and via livestream.

Performances from Anthedemos, Nwakke, Puer Decorum and Kelvin Atmadibrata will be staged and livestreamed alongside video screenings and digital art from Laura Lynes with Billy Leach, Llewellyn Mngun and Jake Wood. This programme is being supported by Arts Council England.

The Ugly Duck organisation is credited with resurrecting unused London spaces as well as supporting underrepresented voices and groups within the arts. Established in October 2012, they have converted a spacious, empty Victorian warehouse in SE1 into a busy creative space which became, and still is, home to countless rising and established artists.

Jake Wood (photographed above – ahem!) deconstructs the obsession many people have with sculpting the perfect physique. We thought he was acting out a scene from The Human Centipede initially. Wood has exhibited at the Folkestone Fringe Triennial and the Herbert Read Gallery in Canterbury. As well, he’s just finished an artist residency in Margate as part of the UCA x CRATE Graduate Award.

Seven artists in total will be displaying work for @Disturbance. Kelvin Atmadibrata is presenting work about adolescent homoerotic fantasies and superpowers, he works between London and Jakarta. Lesbian/Queer musician and performance artist Anthedemos will also be in attendance – Anthedemos creates live music while their alter ego simultaneously does something similar digitally. She has never performed in the UK before but regularly performs across Europe.

The art on display is certainly eclectic. You’ll be able to see some very unique stuff. A film by Llewellyn Mngun Resilience, explores life as an LGBTQI+ activist raised in South Africa’s strict Setswana culture. Be sure to tune in for what sounds like an action packed program by a group of innovative LGBTQI+ artists.