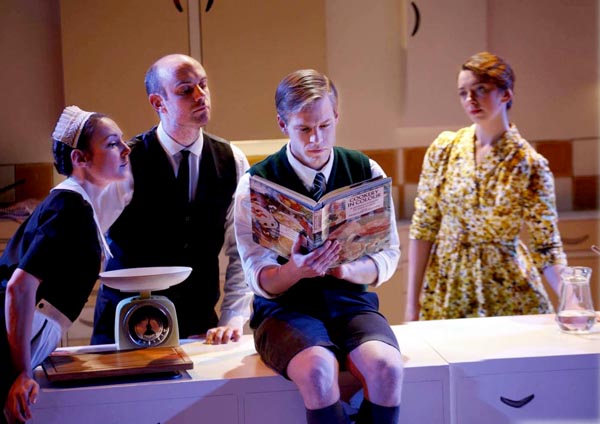 How often have you been to the theatre and been given toffees, chocolates, Parma violets, a walnut whip and a miniature lemon meringue pie?

NEVER? Well then hurry along to see Nigel Slater’s Toast, a food-packed evening based on the internationally known chef’s life story.

It’s a happy/sad whimsical look at suburban life through the wide eyes of a 9-year-old boy who learns to cope with the early death of his mother and the brutishness of his father by escaping into the wonderful world of cookery.

Giles Cooper plays the short-trousered Nigel with smiling charm and innocence, delighting in his mother’s cooking method, of never weighing anything and hoping for the best.

Her inability to make toast without burning it becomes a sort of emblem of independence and freedom of spirit, which Nigel wholeheartedly copies.

The wide stage is used to best effect, lined as it is at the back with kitchen units, an AGA cooker and a tall fridge through which the actors daftly make most of their early entrances.

It’s a multi-tasked cast: Lizzie Muncey not only plays Nigel’s ill-fated asthmatic mum, but 2 or 3 wonderfully scripted cameos, including an absolutely manic cookery teacher who screams at us her pupils, wielding an ominous rolling  pin in her hand.

Stephen Ventura is a kind of Captain Mainwaring of a father, with periods of genuine affection, and other moments of nasty anger. When he takes up with his lady friend “Auntie” Joan, Nigel sets his heart against booth of them.

Marie Lawrence as the cigarette puffing, loud Brummie Joan, with her shake and vac cleaning routine is hilariously outrageous, and the scenes where she and Nigel start a sort of cooking war are a joy to behold.

There are lots of surreal episodes, many of them closely choreographed using mobile kitchen units, and food trolleys.

Jake Ferretti has a number of small cameos, as the gardener whom Nigel adores, as a Royal Ballet school pupil who gives Nigel his first gay kiss, and as a chain-smoking chef at the Savoy Hotel.

The cast are clearly having a ball , and the fun is infectious. Writer Henry Filloux-Bennett has made a delicious evening out of the chef’s rambling book and Jonnie Riordan directs and choreographs the whole with a camp bonhomie that suits the piece.

If you belong to the haphazard school of cookery that says you use “more or less” enough of ingredients, you’ll love this light and fluffy soufflé of a play.

Toast is running at the Other Palace in London.