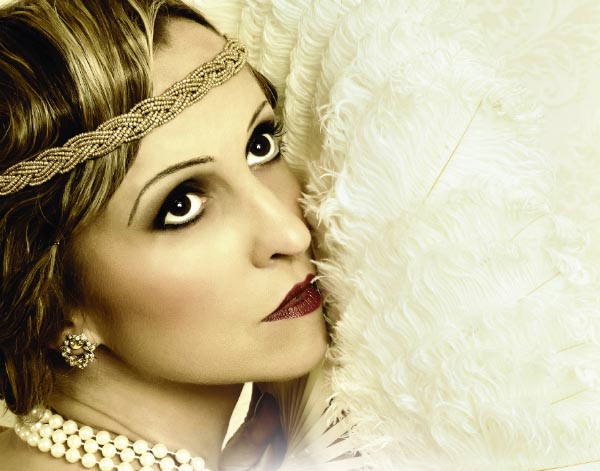 Watching this play at the Devonshire Park Theatre in Eastbourne last night I realised why I never finished F. Scott Fitzgerald’s The Great Gatsby I really did not care for the players and the notion of the poor little boy become rich and then having everything taken from him did not satisfy me at all. The book is so full of snobby, wastefulness and mean, small unlikeable people. Fitzgerald’s appeal was to a somewhat naïve culture bloodied by its first serious experience of a terrible global war and a need for the amnesiac effects of frivolity, I’m not sure the same counts for the inhabitants of Sussex.

I wasn’t gripped by this production, the cast did an able job with an unattractive plot. The make-do geometric staging didn’t feel one thing or the other and had rather a lot of scuff marks on it which made it look shabby in the excellent lighting. The book is a monster to prune so it’s always going to be difficult to stage, but the young cast performed with integrity and verve and one scene ceded to another smoothly and colourfully.  Blackeyed Theatre have done some superb work in the past but I felt this was not one of their better adaptations.

The cast did well but it never really caught fire, there was a lot of chop, change, interludes, reflection and some clever effects (the car accident scene being particularly good) but it somehow stayed disjoined.  I didn’t care about a single one of the characters, their demeaning love affairs, broken dreams or aspirations. The addition of a strong smoky voice for the jazz segues would have strengthened the musical interludes along with some amplification; why sing quietly into a mic that’s a prop when a mic is what’s needed. It’s a pity there was not really one single noteworthy performance. I left the theatre, much as one might have left one of Gatsby’s parties, kind of entertained, feeling that time had passed, witnessing some gossip and action but wondering if it was worth it. Gatsby was a wounded slender dreamer and I would have found it much more convincing had the brutish husband held the parties, made a pass at the kitchen maid or butler, while his vapid wife danced insanely with her one dimensional golfing friend, and then they all went out in a boat, holed by a spurned butler and drowned in the sound. Quietly.

As I drove away into the silent darkness of the Sussex night with the roof down and the stars reflecting in the waxed and polished bonnet of my little car we roared over the cliffs and downs watching the moon reflect on the ocean and listening to the cosy babble of my glamorous international companion who insisted on suggesting a wit-off between Coward and Fitzgerald might be a fun way to spend an evening. I reflected on how close a lot of folks lives are to Gatsby’s, they are all carelessly rich folk, being careless with other people’s lives and then retreating into their money and privilege and letting other people clean up the mess they create. The story is very familiar, wealth, fame, dissolution, snobbery, money and a lack of meaning. Unfortunately there were no drunken floozies stepping out in front of the car waving their pearls and desperation at us, nor did my glamorous confidante grab at the wheel in a drunken panic, there were just a few bemused Sussex Sheep looking on as we giggled and sped off into the night. I felt less than thrilled.

I reflected that at least the journey was worth it, the Devonshire Park being a treat of a venue even if the show was lacklustre, (it’s a darling gem of a theater and the staff are lovely,) and was quietly glad that my vivacious companion was not lionising and glorifying Mr. Churchill, unlike the journey home following Rattigan’s Flare Path last month, some small mercy indeed. So we drove on toward death through the cooling twilight.

This Great Gatsby is one for the ardent fans of Blackeyed or dedicated followers of Fitzgerald. I would suggest you get the film out instead but that was terrible, so don’t.

For more info or to book tickets see the theater website here: