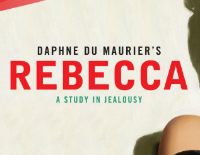 Following the mysterious death of his first wife, Maxim de Winter returns to Mandalay with his new young bride. Surrounded by memories of the glamorous Rebecca, the new Mrs De Winter is consumed by jealousy. She sets out to uncover the secrets of the house and a past fiercely guarded by the sinister housekeeper Mrs Danvers but all is not what it seems in Manderley…

The essence of Rebecca as book, film and play is about the relationship between a man who has power and women who has not, and although this is often distracted by the relationships between the women and their over bearing shrill or sinister natures, at its heart that is what beats and this version of the play, full of secrets and humour addresses this straight on, mainly in a physical way but emphasises through the actions, placing and staging the overreaching privilege and unquestioned power of the lord of Mandalay.

The plot – of older, distraught wealthy man meeting a younger, naive poorer woman whom he decides to marry in order to restore his mental health is common to any number of traditional English romantic novels, most obviously Jane Eyre and Daphne du Maurier adds in murder mystery, gothic horror and psychological twists to her most famous story.

Once I had let go of what I wanted to see, and what I expected to see and allowed the mashed up knowing irony of this production to engulf me like a rising tide I enjoyed it. Initially I was surprised to see Rebecca being milked for laughs, but then I’ve become overshadowed by the camp cult of Mrs Danvers worship and the smoky presence of Hitchcock, but this hearty, Cornish version with its unceasing presence of the sea, fishermen and the unyielding ebbing and flowing of the tides caught the damp gothic camp at the heart of du Maurier’s novel, just not the harshness of Mrs Danvers. The plot is convoluted and becomes silly at the end; the dénouement felt like an episode of Midsummer Murders but this is portrayed well on stage, keeping the narrative tension high while focusing on the relationship between the newlyweds rather than the rage of Mrs Danvers or Rebecca’s reasons for welcoming death.

It’s an interesting, entertaining and ultimately successful production using elements of dance, live music, comedy, puppetry, noir, classical theatre and a very modern postmodern wink to the supremacy of ironic deconstruction, (which means they are very clever with what they do and know it) and it worked as a new telling of a well-loved story.

Director Emma Rice uses Daphne du Maurier’s own description – a study of jealousy – as a subtitle for the play and a step off for her adaption exploring the endless curves of jealousy and envy that permeate the novel. It’s an interesting perspective and the cast work well to keep the tension up even though there is a leaking out when the slapstick starts.  The Greek chorus of fishermen, all dank and sou’westered are excellent and shift the narrative using sea shanties that are supremely atmospheric. The cast chop and change parts and also play all the music in the show which adds to the immediacy of the action and helps place this play firmly in the realms of the familiar British mythologies of the sea, ghosts and swirling dark presence of those who have gone before.

There were some annoying knowing winks from the staging on occasion and I failed to see the point of the Welsh houseboy and his carry-on ish updates on the te’lley’phone, and being Welsh myself it is irritating to see a working class Welsh accent played just for laughs, one wonders if the Irish lilt would have been used in such a way. I wanted Mrs Danvers to have menace and dark loathing but she was just mean and consumed with bitterness but a good performance from all the cast none the less.

For more info on KneeHigh Theatre production of Rebecca see their website here:

I felt the presence of Rebecca; my Rebecca – the book I treasure and the film I love – hovering over the whole piece, haunting it with what I wanted Rebecca to be, how I wanted to see it, how I wanted to experience it, how I remembered Rebecca, how it was for ME!  and when I recognised this it really added to my entertainment. I resented them, they didn’t know the real Rebecca! I was Mrs Danvers, I had, at last achieved my dream…. KneeHigh had given me a treat,  had taken my expectations and added them into the mix.  This made me smile, relax and allow the shenanigans of the second half to delight, engage and enchant me. This is strongly part of the charm of this production that they are brave enough to take the story and wring it out again for novelty, originality and a fresh appraisal of these people and their wretched, empty, cynical lives and the impact death can have on the web of lies people tell themselves just to be able to carry on living.  Director Rice has taken the dank dust sheets of Mandalay and shaken them out into the sharp salt breeze of the Cornish cliffs, grabbing handful of plot, narrative and character  and stirring them up into a salty thick fisherman’s broth.

Sometimes I wish I’d read the press releases more thoroughly, particularly as I went to the wrong theatre, so make sure you go to the Devonshire Park Theatre to check out this production, it’s a wonderfully restored theatre, very comfortable and makes other local theatres look very shabby in comparison, The Devonshire park is a real delight of a place.

Last night I dreamed I went to Mandalay again, but it was a dream; of music, madness, jealousy and love being played out in this perfect little theatre on the coast of Eastbourne. The cliffs were swathed in sea fog as we drove over, the roof down the sun bleached out and watery; it was unearthly and spooky, diaphanous and frothy, just like this production.

Read an extract from the book here: