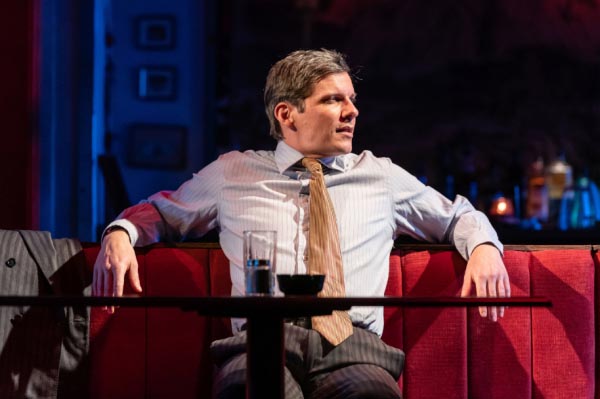 David Mamet’s modern classic is a bleakly funny look at the world of men.

IT centres on a group of salesman as they do anything it takes to close the deal by getting their clients – though ‘victims’ might be a better word – to buy sections of real estate. They lie, flatter and cajole and believe this is the way business should be conducted. Top of the Leaderboard Ricky Roma (Nigel Harman) talks almost nostalgically about how their dubious methods make up the ‘old ways’ as if conning people out of money is part of some noble and ancient tradition.

Shelley Levene (Mark Benton) is simply going through an unlucky streak and that’s why he’s not make the kind of sales that a few years ago earned him the moniker ‘Levene the Machine’. He explains to the office manager John (Scott Sparrow) that he’s caught in a vicious circle: because he hasn’t made the sales they’re not giving him the good leads which in turn means he can’t make any sales. Levene offers to bribe John for the hallowed ‘Glengarry’ leads but can’t pay the cash demanded upfront. David Moss (David Conway) suggests to George (Wil Johnson) that they could make a lot of money by stealing the leads and selling them on. Ricky Roma meanwhile manages to make a sale without even having a lead by simply dominating a poor sap (James Staddon) he meets in a restaurant.

As much as the play is about men, it’s also about power and how quickly it can be lost. For example Levene makes an incredible sale which gives him license to humiliate John after the latter makes a terrible mistake. Only minutes later it’s Levene who is squirming as John embarks upon an action which will ruin Levene’s life. This theme is made explicit in the scene where Staddon tries to cancel the deal on orders from his wife. Even when he realises that Roma has lied to him he pathetically apologises for his behaviour and almost begs for mercy with the confession that ‘I have no power’. His pure submission to the alpha male seems to have a queasily sexual undercurrent which makes it almost hard to watch.

Harman is magnetic as the cocksure spirit of amorality who is undeniably brilliant at his job. Conway is equally good as the belligerent Moss who can even con a fellow con into believing that having a hypothetical conversation could make him an accessory to a crime. But it’s Benton who gives the stand-out performance. His Levene is almost magnificent in his wheedling desperation and the sheer chutzpah with which he’ll brazen out any of the absurd situations he gets himself into.

As a whole the play is difficult to parse. It’s certainly the case that the portraits of its characters are uniformly unflattering – what we see is a group of sexist racist dinosaurs whose sense of worth resides totally in their sense of being men. John is put down as a ‘fairy’, a ‘fucking child’, someone who should not be allowed to ‘work with men’. Is it a critique of toxic masculinity? Perhaps. But its depiction of the one ‘feminine’ character hardly offers a viable alternative.

Whatever you take from it, Sam Yates’s production is a tight, riveting piece of theatre.

Continues at the Theatre Royal, Brighton until Saturday, April 27.