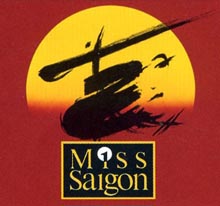 After producing their masterpiece Les Miserables in 1970, Michel Schonberg and Alain Boublil turned their attention to reworking Puccini’s Madame Butterfly into the huge success that became Miss Saigon.

Musically more emotional, complex and operatic than the earlier, heroic Les Miserables, Miss Saigon is set in Vietnam between 1975-78 towards the end of the Vietnam war.

Kim, a young Vietnamese woman flees her village after her family are murdered. She arrives in Saigon and works reluctantly in a night club owned by the notorious owner/pimp ‘The Engineer’.

During the fall of Saigon in 1975, Chris and Kim get separated at the American Embassy  as it is being evacuated by helicopter. Chris returns to America where thinking that Kim is dead, marries a local girl, Ellen. Back in Vietnam Kim gives birth to a son. Chris is the father.

Three years after the fall of Saigon, Kim’s cousin Thuy returns to Saigon and seeks the help of ‘The Engineer’ to find Kim. He wants to marry her and is angry when he finds Kim has had a child to Chris. He threatens to kill the boy. Kim refuses to marry him and kills him to protect her child. ‘The Engineer ‘and Kim flee Saigon together and go to Bangkok.

The story moves forward to 1978, the setting is Atlanta in the USA. John now works for a foundation who repatriates Vietnamese childen with their American fathers. Through his work John learns that Kim is alive and has a child. He tells Chris and suggests that they all go to Bangkok to search for Kim and the child.

John discovers Kim dancing in a sleazy nightclub. He tells her that Chris is in Bankok but fails to tell her he is now married to Ellen. Kim goes to find Chris but first meets Ellen who tells her that she is now married to Chris. Kim realises she has no future now without the man she loves. She makes the ultimate sacrifice and shoots herself so that her son will have a better life in America with Chris and Ellen.

Miss Saigon opened at the Theatre Royal, Drury Lane, London on September 20, 1989 and closed after 4,000 performances on October 30, 1999. It opened on Broadway at the Broadway Theatre in 1991 and remains the eleventh longest-running musical to ever run on Broadway.

This production of Miss Saigon is staged by the Brighton Theatre Group Youth, was performed entirely by students and has been adapted for young performers.

It is pushing the boundaries for any ‘am dram’ to take on a musical of this scale. However, while the subject matter is very challenging I never felt uncomfortable watching these young people play the roles of prostitutes and pimps. The director had done a great job.

The production is quite simply majestic. The production has a few weak moments but the commanding performances by the lead performers make you forget those moments very quickly.

Richard Hadfield who plays John is at 19, one of the older performers with the company. He has a glorious full lyric baritone voice. His presidential delivery of Bui-Doi in the second half was one of the highlights of the show. For four minutes he held the audience in the palm of his hands. It was all rousing stuff. His phrasing was immaculate, intonation secure and I believed every word he sang.

Ollie Wray played Chris perfectly and his characterisation clearly engaged the audience. He has a fine lyrical voice and the few moments when he over pitched the high notes were more to do with the halls acoustic than his technique. He was more than a match for his big  numbers Last Night of the World and Why God why? His performance at times was quite disarming in its boy next door simplicity and delivery.

‘The Engineer’ was sung and acted to perfection by Jordan Southwell who did not miss an opportunity to squeeze every last bit of comedy out of the role. Jordan had the least developed of the male lead voices but was streets ahead of everyone in the acting stakes. I will remember his delivery of The American Dream for a long, long time.

Finally the crucial role of Kim was played by fifteen year old Jade Kennedy. In 1975, Miss Saigon turned Lea Salonga into an overnight star. In this production Jade marks  the cards of singers 10 years her senior with a performance full of pathos and passion.

Her voice is round and full in the lower register and her chest voice is huge and soulful. When her head voice develops completely she will be the full package. For a 15 year old to manage the technical challenges of this role is quite astonishing.

Must give a quick mention to the choreographer, Jodie Harrop. Her choreography during the Dju Vui Vay wedding sequence in the first act was pure genius.

The production was directed by Michael Burnie who did not allow the scale of the shows concept to detract him. He kept the action fast and furious and the scene with the helicopter was impressively handled as was every number with the company on stage together.

The company were well drilled in good voice and clearly having a great time.

The fourteen piece band of keyboards woodwind, brass and percussion were directed by Ellen Campbell. Some of the tempi she chose were slightly quick for my liking but maybe that was more to do with the acoustics of the Corn Exchange which were on the dead side. It must have been difficult for these young singers to handle such dull acoustics.

I have had a handful of great night outs in Brighton this last year. This show was up there in the top three.

Overall I was left thinking the  future of musical theatre is safe in the hands of these young people.

Miss Saigon plays until Saturday, February 2 evening performances at 7.30pm, with matinees on Thursday and Saturday at 2.30pm.

Make a special effort and go see it.