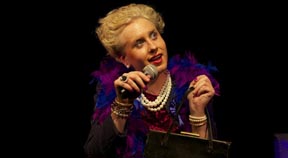 Margaret Thatcher Queen of Soho is back!

The show is a drag musical comedy cabaret extravaganza starring the Iron Lady herself. Over the course of the show Mrs Thatcher tells the story of how the homophobic legislation Section 28 came to be. However, whereas in real life it passed, in this version Maggie gets lost in Soho on the eve of the vote, realises the error of her ways, overturns the bill, and leaves Whitehall to become a gay-rights championing cabaret superstar.

The story has been published by Methuen and received an Off West End Award nomination for most promising playwrights for Jon Brittain and Matt Tedford.

Even though the show is primarily a comedy, it has serious points to make about tolerance, the history of gay rights in the UK, and the difference one person could have made.