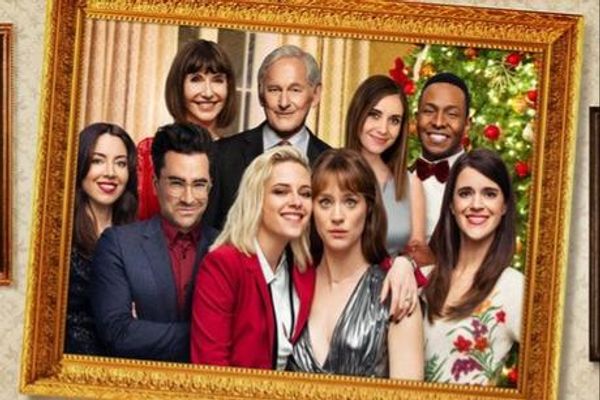 The Happiest Season has already broken box office records for Hulu, the American streaming giant. It was the most watched film on the platform over its opening weekend.

Kristen Stewart stars as Abby, along with Mackenzie Davis as Harper. They’re dating and it’s starting to get serious. Abby joins Harper at her parents’ for Christmas. The film is essentially a gay version of Meet The Parents, only with less charm and weak comedy.

Harper’s family are upper-middle class and quite conservative. They don’t know their daughter is a lesbian and assume Abby is her roommate. The mum is obsessed with presenting the perfect family image on social media and this leads to some of the film’s better comic moments. It becomes apparent to Abby’s family that the girls are more than friends. Inevitably, a happy ending rounds of this festive romcom. You can see it coming for miles.

The Happiest Season recycles many tropes from festive and romantic classics. There’s lots of Christmasy decorations, a nice big family home and an awkward will-they-won’t-they love story. There’s even – wait for it – a gay best friend!

While the film is a bit trite, it isn’t offensively so. In terms of its cultural context, it’s a very significant step forward for LGBT+ cinema. The fact that this film has broken box office records shows how far we’ve come. It’s a festive, family-friendly film. And it’s a gay film! The gay aspect is almost incidental, though. Gay culture has become far more visible in the mainstream and it’s made a big difference.

A film like The Happiest Season probably wouldn’t have been so mainstream ten years ago. Twenty years ago it would have been unthinkable. LGBT+ cinema can now enter the mainstream without anyone dying at the end in the arms of Meryl Streep. This is a gay film you can watch with your nan and she’d probably enjoy it more than you.

You can watch The Happiest Season now on Amazon.