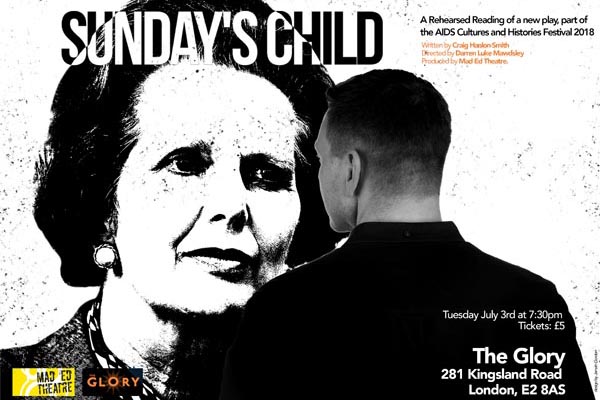 How has AIDS been experienced, represented, and remembered throughout modern history?

DURING July, over twenty events will take place across London as part of the first AIDS Histories & Cultures Festival, including workshops, film screenings, talks, parties, music, poetry and performance.

The festival will explore some of the histories and cultures of HIV/AIDS from the 1980s to the present day, with many events free to attend.

Highlights of the month-long festival will include:

♦ A workshop exploring the ‘80s archives at the Bishopsgate Institute.

♦ The soft launch of the #AIDSMemoryUK Campaign, and

♦ Terrence Higgins Trust’s Positive Voices a talk from two people living with HIV, Rebecca Tallon-De Havilland and Jonathan Blake, who was part of Lesbians and Gays Support the Miners and was portrayed by Dominic West in 2014 film Pride.

The play Sunday’s Child, written by long-time GScene contributor and columnist Craig Hanlon-Smith, explores the origins, immediate and long-term impact of Clause (Section) 28 on the LGBT+ communities in the shadow of the HIV/AIDS crisis and thirty years later upon the individual. ‘Section 28’ and its consequences continue to reverberate within the LGBT+ communities, as an entire generation grew up without open or kind discussions regarding sexual orientation identity.

Dr Janet Weston, one of the organisers of the full festival, said: “The crisis prompted by the emergence of AIDS in the 1980s is starting to recede from popular memory, but historians are beginning to engage with the subject; new art, exhibitions, and documentaries are reflecting back on the life and politics of HIV/AIDS; and activism has been given new energy by the arrival of Pre – and Post-Exposure Prophylaxis and the U=U campaign (Undetectable=Untransmittable).

“The lives of many of those living with HIV/AIDS have been transformed by medical advances, especially over the last 20-odd years, but even so, inequalities, ignorance, and stigma remain and are often shaped and informed by the early days of the epidemic. We hope you’ll join us for this important festival as we connect past and present, history and the arts, drawing together heritage, academic, charitable, and cultural organisations to explore memories and experiences of HIV/AIDS, then and now.”

The festival has been convened by the Raphael Samuel History Centre, with arts events curated by Ash Kotak at Aesthesia. The RSHC is an outreach and research centre supported by Birkbeck and Queen Mary, University of London, dedicated to exploring public, interdisciplinary, and experimental history across periods and regions.