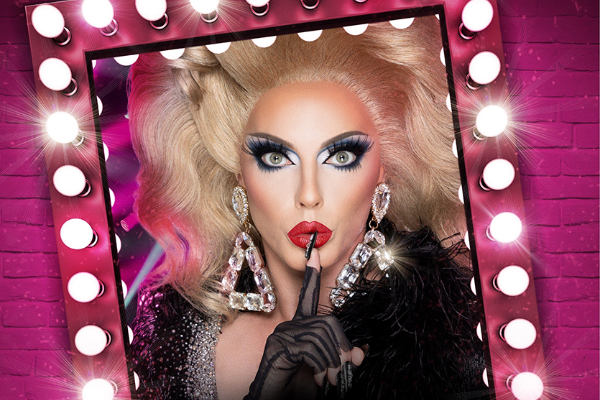 Justin Johnson knew as an eight-year-old in Mesquite Texas that he would grow up to be creative. Thanks to what he calls his “ fairy gay uncle Bobby “ he took his first dance class and the future was set.

And in the coming week, some 30 years later , he headlines for a week at London’s Vaudeville Theatre in his own flamboyant, dancing journey through his life as the alter ego Alyssa Edwards.

He told me : ‘I had a masculine father, who rode a Harley Davidson : the thought of his son being in dance class was confusing and mind boggling”.  At a time when  he had no queer role models on tv he describes himself as “ a boy in a bubble ” , entering  fierce competitive dance events .  “I was socially awkward . What made me good at dance was I could express myself. I was gifted with creativity to share stories through the art of movement , in a much more fluid way than speaking”.

”My family thought: Oh that’s just Justin – I didn’t realise who I really was, and what a journey it was . And now what a plot twist – being in the West End ! “.

His journey has been through the massively popular gay pageant circuit , modelled on the straight female beauty contests like Miss USA and Miss World. Times have changed and he now feels that they are judgemental of external beauty , but they introduced him to glamour and glitz and that at least has never left him.

In pageants his character of Alyssa was born and it led to paid work . Eventually it also led to RuPaul’s Drag Race – he featured in Season 5 and in the spin-off All Stars series .  “ I didn’t fully understand the show till I was in it “. He had joined it reluctantly because his dance school business was just taking off. I was curious why he thought the brand was now so successful worldwide. “ It’s a fun show that appeals to anyone and everyone. It’s more than just flamboyant men gallivanting. It’s a journey of courageous souls , sharing their story, with drama each week. It has a lot  of heart ”.

His dance school in Mesquite, aptly called Beyond Belief , is the subject of a Netflix documentary series Dancing Queen. I asked him about the crazy moms of the young dancers  he has to deal with. “ They’re so supportive of me as a teacher ; they give me the opportunity to mentor their child “. Asked if he was worried about the pressure on these kids ,  he was clear: “ the world  puts pressure on kids; it’s important for them to learn this at a very young age. Stand for something or you’ll fall for everything . It’s a preparation for the world. They can fall but we won’t knock them down. It’s tough love but they know they have to keep on working “.

His London show, which runs 7-13 June is his journey from the childhood of what he calls “ a little gay Justin to this Texan over the top character Alyssa, and everything in between . It’s fun, vibrant and from the heart “.

Asked if he has other plans for the show he tells me: “ watch this space ; it’s  definitely going on tour ”.

What advice would he give to the young Justin ?  “Stay tuned; hold tight; there’s a plot twist round the corner. Believe in Oz, believe in the rainbow. You’ll find your tribe , where you’ll be loved and valued”. In some ways he sees lockdown as a liver lining : “us Queens have fought worse battles; we get up and we sparkle. I’ve made a lot of self-discovery ; I’ve loved the outdoors ; loved home; loved bike riding . I needed to refresh”.

Tickets for Memoirs of a Queen from nimaxtheatres.com

Look out for my review of the show