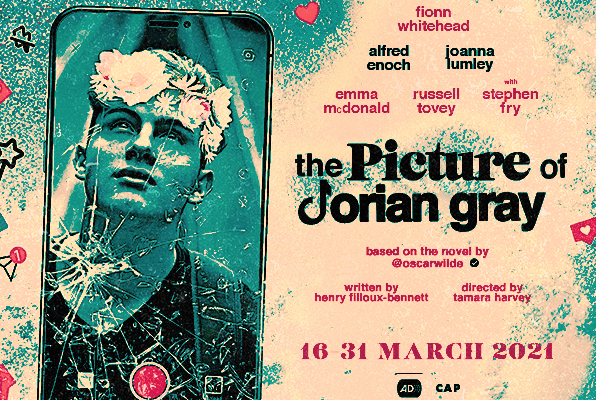 In the week which marks the anniversary of theatre lockdown the enterprising Barn Theatre, Cirencester has joined forces with 4 other venues to present a fascinating modern take on Oscar Wilde’s novel about a debauched  young man who gives his body and soul for eternal beauty.

Writer Henry Filloux-Bennett transforms the story from Victorian London to lockdown now and turns the pretty boy Dorian Gray (Fionn  Whitehead) into a vacuous social influencer, followed by more and more people fascinated by his charisma and youthful looks.

Whereas the original has Dorian’s physical decay trapped in a painting, here his friend Basil ( Russell Tovey) gives him a memory stick with the anti-ageing app on it. The parallels work remarkably well. Opening with an all-knowing interviewer ( Stephen Fry ) we get a backward look at the tragedy through the words of philanthropist Lady Narborough, played as a delicious  tease  by Joanna Lumley and a conflicting interview with fellow debauchee Harry, played in a beautiful laid-back, no worries style by Alfred Enoch.

There are lots of Wildeian aphorisms sprinkled through the modern text and clever sideswipes at university quarantines and  the Royal Shakespeare Company.

Directed tightly by Tamara Harvey and filmed in lockdown, the presentational quality is stunning, with individual performances captured separately. The on-screen special effects add to the close-up  drama and it’s difficult to see just how this could be replicated in a standard stage performance, but I guess it’s testament to the ingenuity theatre-makers have had to use during this last year to keep performances alive.

Fionn Whitehead is moody, engaging and always good to look at, and Russell Tovey is often a disembodied voice but convincing as the architect of Dorian’s downfall. Emma McDonald is an equally engaging  student actress who loses her way as Dorian’s love interest Sybil.

The production is a joint venture with Theatr Clwyd, Oxford Playhouse, the Lawrence Batley Theatre, Huddersfield and the New Wolsey, Ipswich . It’s available online  until 31 March.

It’s a gripping modern Faustian tale that’s not to be missed.