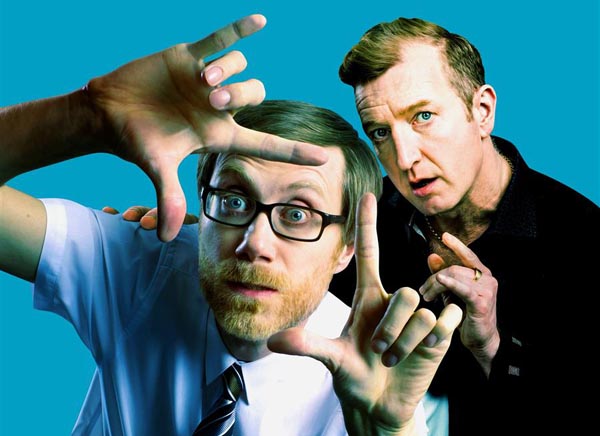 It’s rare that you can see in an actor’s face a look of “I know very well this is tripe, but I’ve just got to go through the motions,” but it is written all over Stephen Merchant’s gormless face from the very beginning of this revival of Richard Bean’s The Mentalist.

Ted (Merchant) and Morrie (Stephan Rhodri) are ‘best Chinas’ stuck in a grotty hotel room on some sort of mission. Morrie brings out a video camera: Ted takes his trousers off. But all is not what it seems.

Through a fog of what would now be called ‘banter’ Ted reveals his manic intention: to promote a cod psychology book that his son found under a shed he’d just demolished. There’s even a community in Peru living by the book’s ethos. Ted visited, but was told to leave ‘due to an unfortunate incident.’

Both talk constantly, jumping from subject to subject, only neither listens to the other. They’re both talking to themselves, a constant stream of delusional fantasy, braggadocio, and absolute guff. The hotel room fills with cig smoke, bullshit, and desperation.

The woman I was sat next to was a great GREAT Richard Bean fan and was practically jumping up and down in her seat with excitement at the spectacle to come. She’d even seen The Mentalist when it was first on at the National Theatre thirteen years ago and had loved it. Curtain up and she guffawed heartily. Then she laughed. Then she tittered. Then she fell awfully silent.

As we rose for the interval she confessed she might not come back for the second half. Others followed her lead.

So what’s up with this play from the gilded hand that wrote One Man, Two Guvnors? Unfortunately, almost everything in this Abbey Wright directed production.

Its main fault is its lack of snap. It’s a script that needs to be pushed along by the actors, not pulled. Rhodri is actually rather good as Morrie, but Merchant, although seemingly ideally cast as the swivel-eyed Ted, lacks any momentum at all. He’s excellent at switching from an indignant rage filled twat to a kid who’s just opened his eyes to the wonder of the world, but his pace is slow. This is a play that could and should have been speeded up to sound like a mouse on helium, and it’s not often I get to say that…..

There’s quite a nice twist at the end and it almost gets to that frenzied pitch in the last 15 minutes, but it’s just not enough to save a production this sluggish.