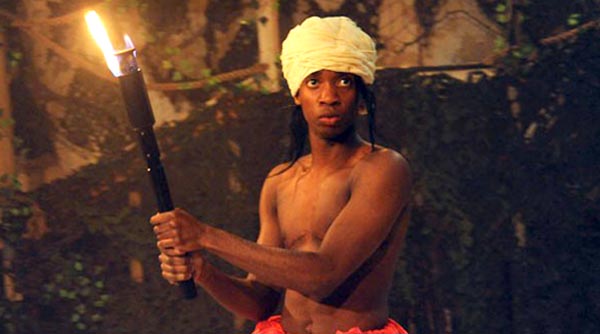 From the moment you enter the Emporium Theatre, you become part of the wonderful world of the jungle set created for this production.

The set is very effective, you can feel the humidity of the jungle, you can smell it and you can touch it. It is all around you creating a magical world, where the darker sides of Kipling’s classic sit comfortably with the magical touches and tricks James Weisz the director, brings to this production.

With the assistance of Baloo the bear and Bagheera the black panther, Mowgli the mancub is raised by wolves in the Indian Jungle. Shere Khan the tiger is sore about losing Mowgli to the wolf pack and is a constant threat to Mowgli’s life.

After Mowgli is captured by the monkies, Baloo and Bagheera with the help of Chil the kite and Kaa the python, set out to rescue him.

Akele, the leader of the wolves worried about Mowgli replacing him as leader of the pack sends Mowgli back to the human village where he is adopted by Messua who believes Mowgli to be her long-lost son.  Mowgli has trouble adjusting to life away from the wolves and returns to live in the jungle.

Doug Devaney makes a loveable Baloo the bear, confident in his masculinity while able to steer Mowgli through life’s challenges, giving him hugs and bringing a wonderful feel good factor to the evenings entertainment.

Michael Adams as Akela shines as the leader of the wolves, played by children, who are the real stars of this production. These exceptionally talented kids are well-drilled. They sing and dance well, and despite their young ages work very well as a team, always listening and watching each other.

Rishi Nair, as Shere Khan the tiger is a handsome and majestic beast of a man who holds the audience, both male and female and the children in the palm of his hands.

Suzanne Proctor as Bagheera the black panther brings a sexy naughtiness to the role which in the original Kipling text is a male character.

Gordon Winter as the wild, crazy chief monkey, engaged with the kids in the audience from his first entrance, managing to frighten a few of them and me along the way. Better than panto and much more fun.

Amy Sutton expertly played Chil the kite and Kaa the python who are both puppets created by Matt Rudkin.

Everytime she came on stage the children in the audience were enthralled. The skill of a good puppeteer is that you watch the puppet and not the operator. I never took my eyes off the puppets all evening, which is as good an endorsement of Amy’s skills that I can offer. Her contribution was magical and for me made the evening.

Finally Kamari Romeo played the role of Mowgli, who despite his small frame commanded the stage throughout the performance. This was casting at its best. Kamari brought light and shade to the role, his vocal register at the top was rounded and musical while his intimate moments cuddling with Baloo the bear were a joy to behold.

The musical score, while at times dirravative of early Lionel Bart scores was expertly directed by Simon Gray and while the score is short of a memorable show stopping number the final song “If you need a friend” made for a great finale.

This production is much more than a show for the kids. The adults in the audience loved it and I would recommend going along to see it with or without your kids, in tow.

Tuesday – Saturday at 7.30pm, Saturday and Sunday matinees at 2pm

For groups (10+) discounts and details email: