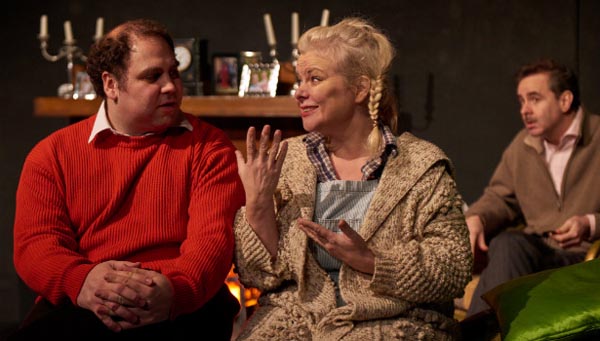 Eugene Ionesco’s classic absurdist play was first performed in Paris in 1950 and since then has gone on to become one of the most performed plays in France.

THIS is perhaps not surprising given that, situationally, the play is set in the suburbs of London and takes great delight in poking fun at the strange lives and antics of its English, lower middle class protagonists.

But this wonderful comedy is less about making fun of rosbifs, and much more about the frailties and nuances of language.

The dialogue is an endless cycle of non sequiturs and contradictions, with characters inhabiting a space where words appear to hold no consistency, meaning or truth. The outcome is an evening of relentless farce and much hilarity.

In Slip of the Lip Theatre Company’s production, Griselde Williams and Brian Merry nicely capture the comic angst, repression and isolation of the seemingly straight laced Mr and Mrs Smith, while Sarah Dorsett and Peter Easterbrook are very funny as their mysterious, slightly racy neighbours, their dialogue delivered with deadpan innuendo and some fine comic timing.

All four are well supported by Annie McKenzie’s sexily subversive maid, and Guy Remy’s dimwit of a Fire Captain.

The evening was funny throughout and at times side-splittingly hilarious.

Despite being over 60 years old, the play remains as relevant as ever in an age of so called communications, where we fritter away so many words on mobile phones, texts, emails, and social media yet often fail to say anything that is meaningful.

The Bald Prima Donna plays at the Purple Playhouse Theatre, 36 Montefiore Road until May 27