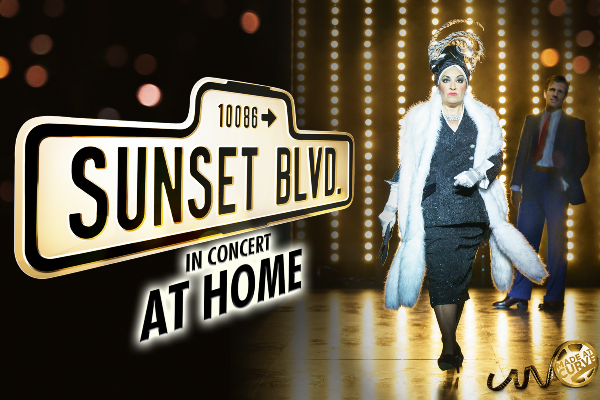 Ria Jones took the West End by storm when she stood in for Glenn Close in the London revival of Andrew Lloyd  Webber’s musical Sunset Boulevard.

Now she barnstorms her way through the part again in a hybrid film/theatre version streamed from the stage of the Curve Theatre in Leicester.

Re-imagined by director Nikolai Foster, the musical seeks to use every  inch of the building , onstage, backstage and even in the flies high up in the auditorium . The great-sounding 16 piece orchestra sit socially distanced in the stalls and so do the cast. Scenes are played out to 7 cameras – most of them roaming in and out of the action.

And my word, it works ! Danny Mac as the hapless writer Joe  usually addresses the audience and in this version, the camera bearing down on him in close-up really brings home that confidential, sarcastic narrative. He really is just talking  to us and his singing voice is a joy.

Molly Lynch is a sweet and pleasing love interest as Betty and Adam Pearce has a marvellous bass to falsetto range as the enigmatic servant Max.

But Ria sweeps all before her as she must do. Her two central mountains of songs With One Look and It’s As  If  We Never Said Goodbye are masterclasses of incredible  range, emotion and pathos. She’s not playing Norma Desmond, the has-been Hollywood icon,  as an ugly grotesque – far from it. What this  performance gives us , it seems to me, is the deranged delusion of the woman , tinged with a strong edge of comedy and sadness.

It’s a truly ground-breaking way of presenting a musical and luckily it will be a permanent record of the show.

Some moments, which would normally  call for close contact ,  just aren’t possible and though it reminds us of what we’re losing , along with no audience reaction or curtain call, we get multiple angles of the action and that’s hugely effective.

Catch the show if you can before it ends on Sunday 17 January – maybe the Curve will extend or repeat it. I do hope so.

In the meantime Brava Ria.