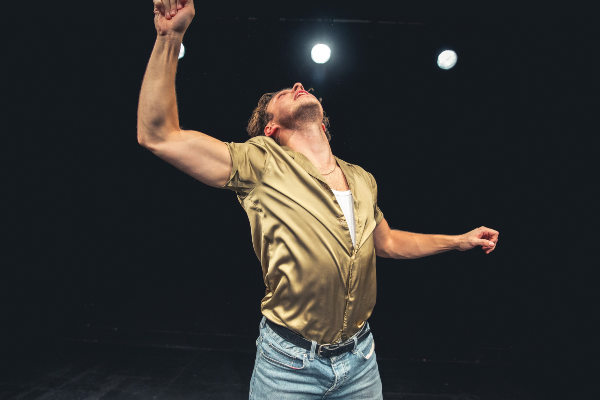 In normal times Joe Potter’s  solo performance in this new Philip Ridley  play would bring the house down and get whoops and cheers up to the rafters of the Southwark Playhouse, where it’s presented by Tramp  Theatre Company .

But in lockdown there’s no audience laughter or applause and it’s spooky at the end  of this  live streamed 70 minute tour-de-force exhibition of acting at its highest level that the actor comes back on stage and takes a couple of bows to a silent theatre space.

The story is intriguing – Sasha had been a child prodigy painter, picked up in his teens by a prestigious art gallery and with a fantastic future ahead of him. Then it all went wrong and we now find him living with his out of work actor/personal trainer boyfriend Chet and bitching about everything that happens to him.

The two go to Sasha’s young niece’ s birthday party with devastating psychological results. It’s a teeming room and garden full of truly awful people – and Joe manages breakneck conversations with this horde , doing all the many voices himself – its Abigail’s Party on steroids and Wiebke Green’s direction takes it at a breathtaking pace, with embarrassing silences peppering the action.

Joe achieves terrific variations in mood and pace throughout – often giving us the dialogue in his head , sharp, nasty and to the point, and then the dialogue he actually uses to keep the family happy. It’s a brilliant device and requires a level of commitment and delivery that is staggering to watch.

Sasha is destructive – particularly of other people’s property –  and his heavy reliance on pain killers makes him at times witty and at other times plain psychotic. The explanation for the sudden end to his brilliant career comes out of the crazy, out of control conversations with his family but in the end there’s a kind of catharsis and hope for this young artist who has the most vivid sense of colour .

It’s possible that a recording of the show may be available and when lockdown ends I truly hope the Southwark Playhouse give Joe and the play a proper outing with a physical audience. I for one will be there to give him the applause he truly deserves.