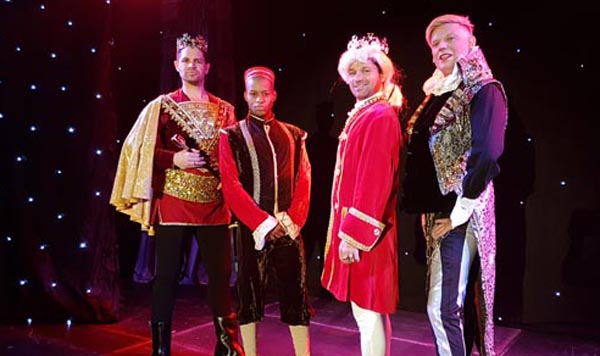 It is sometimes tricky when you try to change the format of a tried and tested product to bring your audience along with you.

This years production of Sleeping Beauty and a little Prick, playing at the Paganini Theatre in the Paganini Ballroom at the Old Ship Hotel on Brighton seafront, is a work in progress.

New director Simon Fielding attempts to give more structure to the way this company work and generally the outcome is successful.

The story of Sleeping Beauty is well know but the really story here is about the performances.

All the cast get the opportunity to shine in this production which has been carefully crafted by the director to showcase the great singing voices of all the performers.

The best comparison I can conjure up is traditional Panto Dame meets Glee!

All cast members get their moment in the spotlight, usually backed vocally by all the other performers. The ensemble vocal work at times is very complex and when it works gives the production quite a sophisticated feel. When it does not it gets a bit messy.

From his very first half entrance as Nurse Nancy Ringworm, David Raven (Maisie Trollette) almost steals the show. His vocal on The Man Who Got Away was powerful and poignant.

Jason Prince (Plonker Aide de camp to the King) is gloriously over the top and very believable. He makes me smile everytime I see him walk to the onion shop.

I could have done with a bit more evil from Phil Randell aka Phil Harlequeen, who played the very wicked and very glamorous villain, Princess Gladys. A few opening night nerves marred his night but once he gets his teeth into the part and milks the boos and hisses from his audience, he will be fine.

Scott Virgo joined the panto cast in 2008 as the Only straight in the village and has really benefitted this year from working with a tough director. His performance was relaxed and confident and he even gets the chance to sing.

Lascel Wood (Randy Aide de Camp to the Queen and Ethelred) most recently starred in Thriller in the West End. His voice is glorious, he is a great mover and his likeability a real winner with the audience.

Russell Keith (Prince Willy of Cockermouth) a former lead vocalist in the West End production of The Jersey Boys gives confidence and reassurance to all those around him and along with Jack Seager (Fair Enuff and Princess Lolita),who played the lead role in Billy Elliot in the West End for four years the three together give real vocal backbone and musical credibility to this show.

We had to wait till well into the first half for Lee Tracey’s (The Queen) first entrance. Lee is an old hand at playing dame and very popular with this audience. His patter was more disciplined than in previous years, and some of his lines were very funny. It appears the script had been cleaned up of some expletives by the director and to be honest I personally think it benefitted.

All in all a good night out. Tough direction from Simon Fielding has given real structure to the production which allows all the performers the opportunity to shine.

Exceptional musical direction is provided by Sarah Bodalbhai and despite a weaker script than in previous years once all the first night problems are ironed out I have no doubt the show will bring pleasure to its regular audience.

Finally a mention for the Paganini Theatre which has been created in the Paganini Ballroom. The space works very well and despite the heavy carpets and curtains the acoustic is really quite good with good views of the stage right to the back of the room.