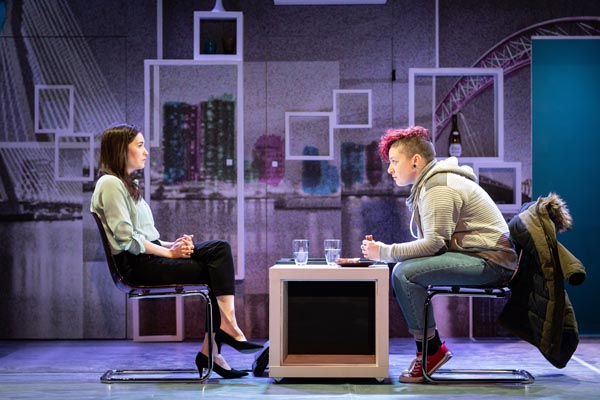 Following a critically-acclaimed West End run, Jon Brittain’s Rotterdam is on a UK tour and this week is in Brighton.

IT is a bittersweet comedy about gender, sexuality, being a long way from home and needing to find our way back to who we really are.

Brittain’s script is simply beguiling, capturing the tensions and realities of long term relationships, the surging excitement of new crushes and the warm embrace of family ties. Brittain also does sharp retorts and furious arguments with style and it’s a pleasure to watch characters arguing on stage without wanting them to stop shouting.

The staccato pace of the plot serves us high tensions, silent aching love, brimming anger and almost unbearable frustrations from all angles, sometimes all at once, it’s a thrill, but never voyeuristic, or preachy, and that’s a rare skill on the British stage.

The first half is slightly too long but when the second half kicks off things really pick up, the narrative starts to move at a furious pace, each story intersecting and foreclosing on the other in a series of interrelationships and shared histories which are concerned with being uncomfortably static, the nature of a persons fear and the urgent need to change and move on with life.

The acting is superb, all the actors are excellent and I was fully engaged with all of them, each convincing with their characters emotional heft. It’s done with verve and tenderness and is compelling in its integrity.

It’s a lovely piece of serious theatre dressed up as something lighter, but it’s not, it’s a profound and touching look at one person’s experience of the early months of transition with various levels of support and commitment from the people around them.

Although informative, certainly from this Cis reviewers perspective, it’s also deeply human and authentic and although the gender transition narrative seems to drive the play, as it comes to a close we see if for what it is, a play about unconditional love, acceptance and the need for change to keep us true to ourselves.

The play offers up insights into transition and some of the scenes are emotionally disturbing and savage in their honesty. The question of ‘is all this change worth it, or can i go back to how it was’ is looked at from many viewpoints, but none as dark or wretched as the main protagonists plunge into drink fuelled despair. It’s a scene of startling simple expression. I was moved. The direction is tight, the music fun electro pop which masks the scene changes which are far far too long.

As we walked into the night, my companion commented that many trans people think that change will be slow and controlled, but that it is neither, it’s complete and utter.

They pointed out some nice touches, which I’d not clocked, the subtle use of ‘gendered colours’ in balloons and party wear, and other neat stagecraft tricks which quietly support the story. The play left us feeling in a good space, having watched some good acting, laughed at some very funny, and spiteful lines and never quite having any kind of resolution at the end. But this ending – which is really a beginning – is as honest, simple and unexpected as the rest of the play.

Catch it while you can, it’s not often we get to see our own narratives on stage, and when they do appear, especially when they are so well written and performed, we should make every effort to support the teams of people who bring them to our performance spaces.

At the Theatre Royal Brighton

For more info or to buy tickets see their website here