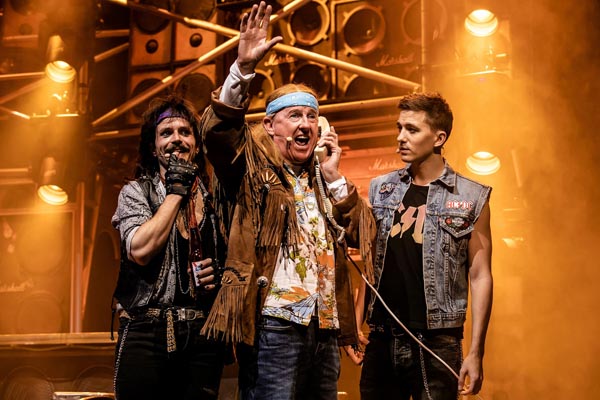 I took my first trip to the newly refurbished Congress Theatre in Eastbourne last night (April 9) and what a treat it was!

OVER the last two years, a multi million pound refurbishment programme on the Grade II listed building has brought this theatre complex, built in 1963, back to its original glory with new heating and air conditioning systems, toilets, flooring, seats, ceiling, lifts and a new state-of-the-art lighting bridge and the replacement of old electrical equipment.

The new Welcome Centre including Box Office and conference facilities, built on the side of the original building, is a work in progress and when finished will hopefully attract many more conferences to the city. Congratulations to Eastbourne Council for investing in the arts to benefit local businesses and hotels.

Now to the entertainment, Rock of Ages, is a Juke Box Musical created around classic rock music from the 1980s, featuring numbers by many Glam Metal performers from the period including Styx, Journey, Bon Jovi, Pat Benatar, Twister Sister, Steve Perry, Poison and Europe.

I got through most of the first half without actually understanding what the storyline was or if in fact there was one. This was not the fault of any of the performers, just a very confusing storyline to follow, despite the valiant efforts of the Narrator, Lonny, played by Lucas Rush to keep us up to speed.

By the second half I had worked out it was basically a love story between two dreamers – Sherrie played by Jodie Steele wants to be an actress/singer, but only manages to find employment in a strip club while Drew,  played by Luke Walsh works at the Bourbon Rooms and is a wannabe rock star.

A sub plot concerns two German developers, Hertz Klinemann and his son Franz, who want to buy the Bourbon Room located on Sunset Strip to redevelop it.

Bourbon Room owner Dennis played by Kevin Kennedy, brings everyone together in a bid to save the much-loved venue from the claws of Hertz and Franz, persuading rock star Stacee Jaxx and his band Arsenal to reform, and hopefully save the Bourbon Rooms from closing.

Forget about storyline, Rock of Ages is a visual treat. Just sit back and soak up the fabulous production numbers from the 80s along with some songs written especially for the show, which is a tongue in cheek parody on all Glam Rock performers from the 80s who did not take themselves at all seriously. The audience at the Congress loved it all and were up on their feet dancing in the final mega mix.

At times it was difficult to hear some of the spoken dialogue but the musical numbers suffered no such problems with special mention for the six piece band of live musicians who were very tight and held everything together quite admirably.

Special mention for the dancers who worked their socks off all evening. However, the choreography was a little fussy and frantic for my personal taste.

Shout out performances from Luke Walsh playing Drew. His vocal range was huge, his tone rounded and he managed to connect with the audience who were onside with him right from the start.

Kevin Kennedy (who was Curly in Coronation Street) plays owner of the Bourbon Room, Dennis with great style and has a seriously impressive voice.

Jodie Steele delivers a solid performance as Sherrie. She looks good, sounds good and can really wiggle her assets.

Lucas Rush playing Lonny the Narrator steals the show, with rude jokes and innuendo while at times engaging the audience directly in conversation. His infectious enthusiasm is endearing as is his levels of energy.

Footnote for the producers, the show would benefit from a more informative programme giving a synopsis of the storyline.