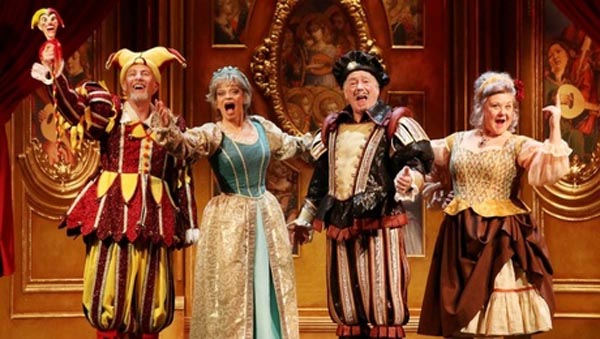 What do retired opera stars do in the twilight of their years? They move in together to a retirement home and bitch, reminisce and dream of what might have been.

So we find a trio of almost-great singers planning their contribution to Joe Green ‘s birthday celebrations – Joe to you and me better known as Guiseppe Verdi.

But in Ronald Harwood’s play Quartet, their inner peace and serenity are  soon shattered by a new arrival – an “opera Great” in the form of Jean Horton. Problem is she was much married and one of her ex husbands is in the aforementioned trio of residents.

Paul Nicholas plays the sprightly but sex-obsessed Wilfred with malevolent delight and he has some wonderful but unrepeatable one-liners. Jeff Rawle as the new arrival’s ex is fastidious, highly intelligent and as it turns out the only one of the 4 paying his own way at the home – the others being there on charity.

Wendi Peters is a weight-obsessed scatty star on the verge of dementia and she plays Cecily like a cross between Mrs Bucket and Margaret Rutherford with hilarious comic timing.

Sue Holderness as Jean is at once arrogant and proud and she like all the others has a terrible secret to reveal. Why did she retire at the height of her career in her 30s – almost 40 years ago ?

In amongst their heart-rending foibles and fascinating past, Harwood also explores the nature of art and performance – much as he did in his play The Dresser and he’s clearly fascinated by the paraphernalia of costume, and make-up.

The four characters have a unifying motto – nsp – no self pity – but the dialogue betrays this and it is only when they are finally unified to recreate their famous performance of the quartet from Rigoletto that we see the optimism which is possible even in old age.

In the closing half-hour of the play each character in turn bares their soul and confesses – and we love them for it. The climax of the evening is truly stunning.

Though they were all “somebody” once, the concert reaffirms their existence  and their determination to make the most of the limited rest of their lives. It’s a great hymn – or rather aria – to life itself.

Quartet runs at the Theatre Royal, Brighton until Saturday, March 30.