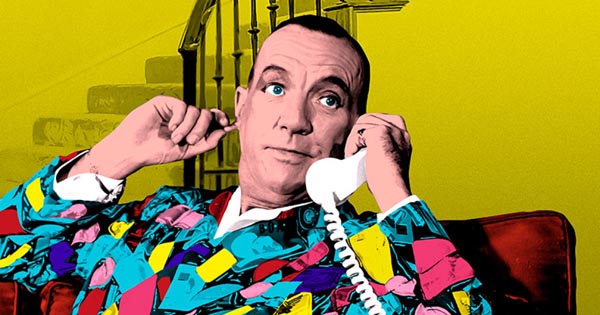 Actor, charmer and diva, Garry Essendine is determined to disregard his advancing years and receding hairline by revelling in his endless tantrums and casual affairs, but as he is about to depart for Africa, he’s besieged by a bevy of would-be seductresses, not to mention his long suffering secretary, his estranged wife and an obsessed young playwright. As he attempts to disentangle himself from their clutches and demands, the humour escalates, accompanied by farce and sparkling repartee.

Rufus Hound and Katherine Kingsley star in this Noel Coward period piece and the play is played loud and brash with a lot of daft and funny physical slapstick, endless moments of synchronised movements and oddly focused character traits.

It’s a bold shove in the direction of comedy sitcom from director Sean Foley and although it’s paced well and climbs to its inevitable tottering pinnacle of farce, it’s a firm loud schlep to get there.

Tracy-Ann Oberman’s performance of secretary Monica Reed was a delight, full of barely their distain and her timing was spot on, she’s an essentially perfect comedy actress, pitching her lines flawlessly and staying engaging all the time.

Hound is at shouting pace from the off and never lets off of the steam which detracts from his severe gibes, the delicate and well-judged foiling of his overacting of overacting from Kingsley gives just enough balance to make it work, but there were occasions when I wanted him to quieten down a touch and let the words do their magic.

I enjoyed the bounce, verve and relentless narrative steam rolling.  Coward was never a scaredy-cat when he could spear his peers; you’ll snort at some of the lines in the most deliciously vulgar way as did some of the Festival theatre audience. A few folk like me snorted at the ‘wrong’ place at the relentless misogynistic yuck but director Foleys attention on the daft has managed to water down the inherent sexism of this play and rendered it sweet, no mean feat in itself and rather refreshing.

Its funny Downtown, ghastly glitterati, its posh folk who talk like type writers and act like them too, it’s staid and hypocritical haut monde and folk love it.  This is a tight team on stage, well-rehearsed, relaxed & also enjoying themselves enough to get the giggles on press night.   No sense of ripping it open and looking at this nasty stuff more closely, but then when it’s this charming, why bother and that’s part of the delight of this play, it mirrors itself perfectly, a sudsy infinity of vanities.

The play looks great, Alice Power’s set is a good-looking piece of work, doors opening and closing, (and slamming which should be softened), rooms off hinted at, movement and comfort , the feel of a very public private space, splendid costumes with some spot on details. Oh those mauve shoes that Tracy-Ann Oberman wore, I wasn’t the only person gushing over them in the interval , lighting and music picked with a real eye on the period and this adds to a feeling of something glossy and frothy and fun, like  the characters want to be.

For full details of the cast and creatives, click here:

Rufus Hound is ok in a part Noel wrote for himself, but he’s absolutely not believable as a devastatingly handsome heart-throb who drives folks to obsession and distraction. The rest of the cast put as much effort as possible into making these manikins of pose and projected wit seem human and believable, some of them just giving up and giving us daft and slightly nutty performances which brought some fresh laughter out, but deep, deep, down this is desperately shallow stuff, perfect Coward.

This soft touch cartoony production works mostly from the engaging efforts of this tightly rehearsed cast, but every moment is milked for laughs, each walk has its wobble, it crescendos perfectly and we are left gasping at the daftness and dexterity of this cast.

We wandered out into the evening, the moon high in the sky, the fairy lights twinkling in the trees and my companion bubbling delightedly about the show as I enjoyed the gentle mumbling of the crowd. The full audience found it a very comfortable treat indeed and the perfect opening entertainment at the Festival Theatre.