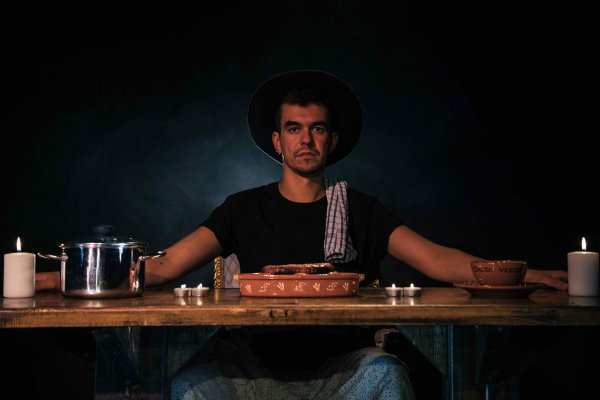 It’s odd that a show so rooted in the Portuguese national identity doesn’t have a Portuguese title or that an event which presents itself as both a debate and interactive show is really, on closer examination, neither.

Xavier de Sousa, or Xá, as he prefers us to call him, and elicits from the audience as if it was our choice is a curious phenomena. An international queer migrant who’s show is about the nature of national identity,  each and almost every audience member is gently cross-examined with the same questions about where they live, why they live where they do and where they came from. It’s an easy way to demonstrate that we are all migrants of one sort or another, but we all journey to a place we can call home from a place that is called Home.

It feels like a profound moment, but I digress. We are invited in, to a Portugal kitchen, Xá is cooking away and doing so in a most engaging and absorbing way, he greets us and we sit in the audience then he starts to tell us about Portuguese Imperial history, deconstructing it, as one must these days, skipping over slavery and colonial exploitation, as he’ll be getting back to these later and giving us the idea of Portuguese Exceptionalism.

Xá then invites four carefully chosen people up to join him on stage, settled them to sit at his table and feeds them, literally with traditional food and figuratively with envelopes with questions about identity, nationality, Brexit, visibility, representation, and other themes. The people at the table then talk among themselves, and we had an amiable four this evening, none of them English, curiously enough, or perhaps through clever choosing by our host.

Xá sinks further back, asking the odd question, but never actually seeming to listen to the answer or to seem interested in it, just moving things along as it were, in this simple Portuguese lunch on stage. Eventually he sits back in the corner, with envelopes given to each person to ask questions and, we hope, stimulate conversation.

Lovely idea, but like all lovely ideas the best ones need careful execution and this one fails, not only on the host, who prides himself on being a careful and indulgent host, but also on the guests, who are not primed, not performers and find themselves having their own opinions and ideas of identity explored for our entertainment and edification. Then with abrupt suddenness, that’s it, we appear to run out of time, the lights dim, end.

Perhaps with a cool crowd of people, well versed in diversity and the language of inclusion this would work well, and well may have worked well in the past, this afternoon we had a very shy person, a person who was delightful and confident, a person perhaps with too little idea of their own privileged identity and a gent who was charming. They didn’t gel, nothing profound came of it, when there was a very interesting moment – a person saying they’d had more hassle for same-sex partnerships than over their identity or perceived racial identity – that wasn’t taken up or taken further, just left, like the cooked chouriço to linger on the table.

Post felt undelivered and underdeveloped to me, it’s not a new show, it’s been performed in one way or another for a while. Xá seemed very keen on sharing facts and also airing his own, perhaps unexplored prejudices. At one point he mentioned Brighton’s diversity is 25%, indeed Brighton  Councils’ own monitoring shows Black and minority ethnic populations to be just that, Xá seemed to think that this was a measurement of race and questioned the accuracy and also how little black representation there is in the city. I’d agree we have small black population and even less representation of it, but the minority ethnic population of Brighton & Hove is huge, just not black, but Jewish, Polish, Iberian, Turkish, Syrian, Irish I could go on…and our minority ethic populations have guided our history and show up in our street names, leading citizens, commerce, buildings and history, this subtle misunderstanding of monitoring of ethnic and racial statistics was fake news and undermined this show.

I left unimpressed. I had a glass of Cachaça, and it was nice to watch Xá lay the table and swirl around in his Vira skirt, he’s very softly spoken and engaging, but this is a hefty subject and we were promised much, I left uniformed and none the wiser. I don’t think I’ve ever left a Portuguese table feeling so hungry.