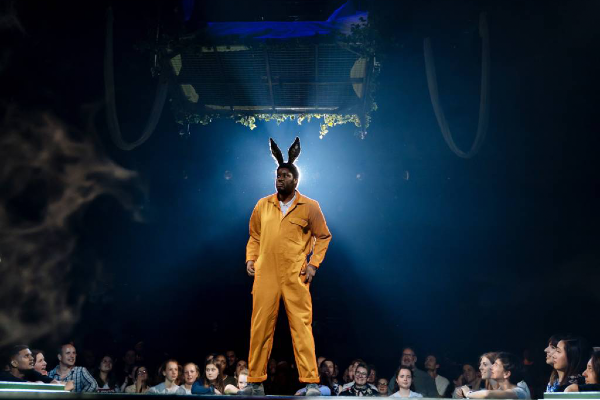 One character late on in this Shakespeare bauble tells us that the play is “ a dream: a fruitless vision “ and I’m inclined to wholeheartedly agree.

Director Nicholas Hytner is quoted as calling the original misogynistic and therefore ripe for mucking about with. Now I have no objection to fiddling with the Bard to make him “ relevant “ to today’s audiences, but the gender swapping he performs in this immersive production seems to add nothing at all.

So instead of getting the unlikely alliance of Bottom the amateur actor and “ rude mechanical” and Titania the Queen of the Fairies, Hytner gives us Oberon, King of the Fairies – quite literally – in a naked bubble bath and then bed with the hapless workman Bottom , who has been bewitched into a donkey ( that latter transfer  at least loyal to the original ).

On top of that the director has given free licence to the cast to make up ad libs, asides and general jokey bits to modernise the feel- and none of it dear viewer, none of it works.

David Moorst is a punk Northern Puck who insists on saying “ furries “ not “ fairies” and even the odd “ Aye up “ as if we were not in a wood near Athens but Last of The Summer Wine land .

Oliver Chris, who as Oberon now speaks most of Titania’s lines looks thoroughly  ill-at-ease throughout, and Game  of Thrones and Star  Wars star Gwendolyn Christie is wooden and pallid as Titania.

Tessa Bonham Jones is funny as the miserable plain Helena and Hammed Animashoun is over-the-top but passably humorous as Bottom in orange jump suit.

I felt most sorry for the large number of standing audience who are pushed from pillar to post when stage crew manhandle large moveable platforms round the acting space.

There’s great fun to be had from lots of aerial work by the corps of fairies but it doesn’t make up for a tricksy romp that doesn’t really come off for me.

A Midsummer Night’s Dream can be seen on YouTube until Thur 2 July. You can watch it below