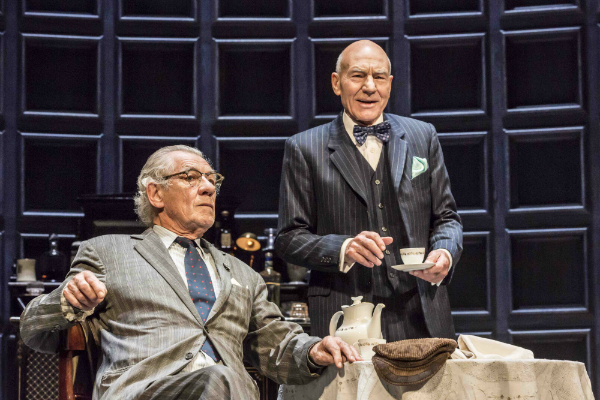 Sir Ian McKellen and Sir Patrick Stewart glittered on the Theatre Royal stage last night, starring in the lauded Broadway production of Harold Pinter’s No Man’s Land, currently touring before ending up in the West End for a limited run.

Harold Pinter’s 1970’s play is set in period and No Man’s Land sees Stewart and McKellen portraying the rather dubious older male characters of Hirst and Spooner, both writers in their later years who meet while drinking in a pub in Hampstead and continues, as the play opens, later that evening at Hirst’s comfortable home.

They laugh and drink ( and drink and drink and drink) and elegantly cavort around each other with verbal twists and barbs and eventually the drunkenness leads on to a game of one-upmanship and intertwine with consideration at the ways their lives reflect the others, polar yet entwined sharing the same foggy past. Then it is their dealings and interactions with some dubious dodgy and slightly unsavoury other younger men, a pair, or perhaps a couple, that becomes a bigger cause for concern.

Director, (writer and actor) Sean Mathias has been a long-time collaborator with McKellen having directed him in numerous theatre roles and worked with both actors on Waiting for Godot and has brought a touch perfect piece of well balanced and nuanced theatre that teases out the underbelly of this Pinter classic. Damien Molony as Foster and Owen Teale as Briggs are perfect in their dodgy weird codependent relationship with Teales in particular leaning into the laughs and bringing some light relief to his threatening, looming presence. Molony’s Foster is the picture of charming menace, visceral and mercurial, and his performance – like all the acting this evening – was superb. What an utterly perfect cast. The set is a wonderful piece of understatement and the subtle lighting effects and sound add to make this a masterclass is classic theatre production, it’s all about giving the actors the best possible place to shine, and what refulgence we witnessed tonight !

Pinter’s Play is slightly askew, it left me feeling strange, odd and prodded, although I laughed and enjoyed the barbed bon mots of the performance. It’s an empty hearted hollowness, barren and oddly comforting, like visiting a ruined abbey in the rain, once great, now sturdy in its survival of the battering of time and by the elements and giving up of grand expectations, the play is romantic in that way, savage in others.

The Theatre Royal was electrified last night, thrilled to its core and you could feel the atmosphere rippling around the packed house, I wonder how many of the audeince understood the deeper elements of Pinter and the point of just letting it all wash over you and not searching too hard for meaning but the laughter was constant and warm. But this isn’t about Pinter it’s about the interplay between these two great actors on stage with a sharp script, and that was utterly superb. Their humanity shines through along with the obvious love they have for performing with (and for) each other, and the dalliance of their actory hearts with Pinter’s crepuscular absurdist nonsense.

Tickets are almost sold out with a queue for returns but if you fancy it; go join that queue and enjoy a little bit of perfect performance and theatre history while it’s in town…

Further info on the show and the rest of the tour dates here: