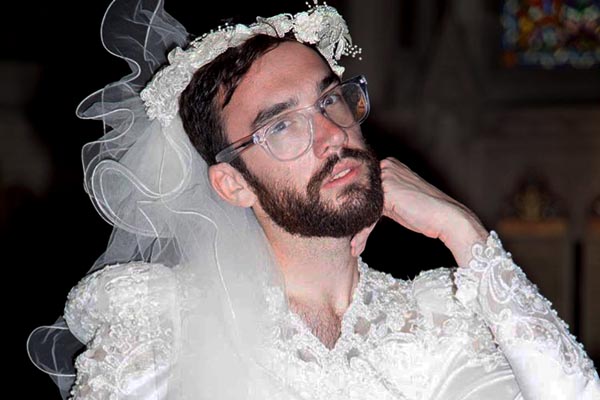 THERE is a moment in this performance where its creator directly asks the audience “who here believes they had a good sex education”? The silence does not suggest an unwillingness to participate but in a brief moment for sixty people upstairs at The Marlborough, we collectively make a damning observation of both our education system and ancient social mantra “no sex please we’re British”. It is quite a statement.

There is sex a plenty in Harry Clayton-Wright’s self penned ‘Sex Education’ but to highlight any explicit sexual content, namely in the accompanying filmed sequences, would be to do this theatrical auteur and his allegory to life a terrible injustice. In a piece that at times affectionately and refreshingly feels unpolished, Clayton-Wright himself suggests the work is still in development, we are reminded of the importance of theatre to challenge, question, move and gloriously entertain.

In ‘Sex Education’ we are treated to a soft symphony of part narration, dance, lip-sync, pornography, drag and cucumber sandwich it is at times moving but largely joyous. The explicit content is shared in such a way that it is both wryly amusing and at times hilarious, but what drives this piece is a central narrative of Clayton-Wright interviewing his mother. It is warm, kind, normal.

We learn deeply personal and painful details of Momma Harry’s teenage challenges and dysfunctional marriage, but shared and punctuated in such a way with Clayton-Wright’s lightness of touch, that we the third member of his family are never sad. Even his tale of an unwanted sexual experience although clearly important, is framed as a moment to brake (not break) rather than a darkness that drives.

Guessing at Harry’s age I would imagine he was a school boy throughout the constricting Thatcherite Section 28. That he inhabits a lustful yet kind sexual freedom openly shared with both his mother and the world is not a scathing attack on such inhibitive legislation but a wafting away of oppression as if to say “you didn’t matter anyway”. It’s genius and uplifting.

Whatever this inspired theatre maker does next will be a must see. There is a revolutionary in our midst and his name is Harry.