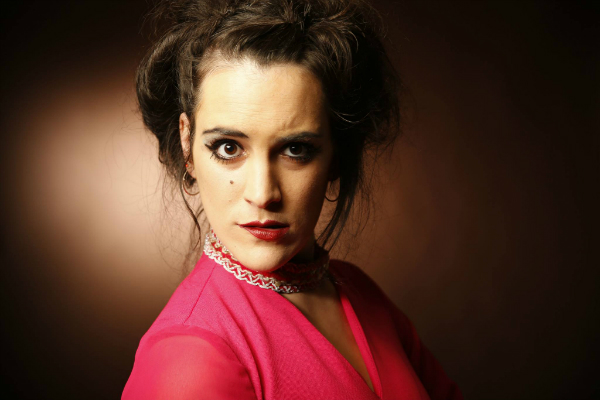 Debuting in Brighton following a critically acclaimed run at the 2015 Edinburgh Fringe, ‘Madame Señorita: ¿Who are you?’ is the result of thirty raucous late-night improvised shows at Edinburgh. Now, with the best material  chosen this is the result – a riot of a show involving Spanish ghosts, housewives and Rock ‘n Roll.

With her slightly cruel but utterly engaging series of nutty characters who ran the gamut of emotions from & to % and back again, Madame Señorita is not scared of looking or being stupid, and this wonderful clash of Spanish theatrical styles and culture and a British fringe audience smashes into the wall, goes out the other side with Madame Señorita’s one foot on the steering wheel and the other up in the air describing arabesques from the walls of a Granadan Alcazar with her elegant dancers toes.  You don’t get a moment to draw breath once she’s off, it’s full pelt and wonderfully funny.

Comedian Paula Valluerca is the unmitigated and unfiltered comedy genius behind Madame Señorita and she is wonderful on stage, not a moment is wasted and she flies from scary, to daft, to profound, to teasy, erotic, bonkers, threatening and heart breakingly sad in flashing bursts of surreal energy.  She’s very Almodóvar and utterly Spanish in the ordinary being teased out and explored for the full emotional impact and that being a full color, full volume explosion of ommph! The audience loved her and it was a pleasure to watch such an essentially silly show have such a deep affect on people, they were buzzing when they left. The show is clowning at it’s simplest, which is often a wonderfully dark and surreal experience and was created from the material produced during a longer run of improv nights in Edinburgh Festival

It was curious to watch a show rooted in improvisation and with a performer so close to her spontaneous creative roots be so stern and unwelcoming of any deviation from her set script, which didn’t detract from the quality of the show in the slightest but did jar a touch. In an hour the need to keep on track must be adhered to for the sake of narrative tension.

Valluerca managed the raucous fringe audience well, charming everyone with just a hint of brooding loco’Iberian menace behind those flashing eyes. She reminded me of the crazy sister of my Spanish Ex, who also had that wonderfully Spanish mix of dark and light so compounded in the Spanish soul, like Goya eating candy floss of getting your face sliced by las Meninas,  Madame Señorita is disturbing & brilliant and will stay with you after the laughter has faded.

If you like your Fringe off the wall, funny and downright bonkers then Madame Señorita is the show for you. The Pink Fringe continues to hold the spirit of the festival in it’s perfectly turned out hands and is probably the best part of the whole swollen Brighton festival.