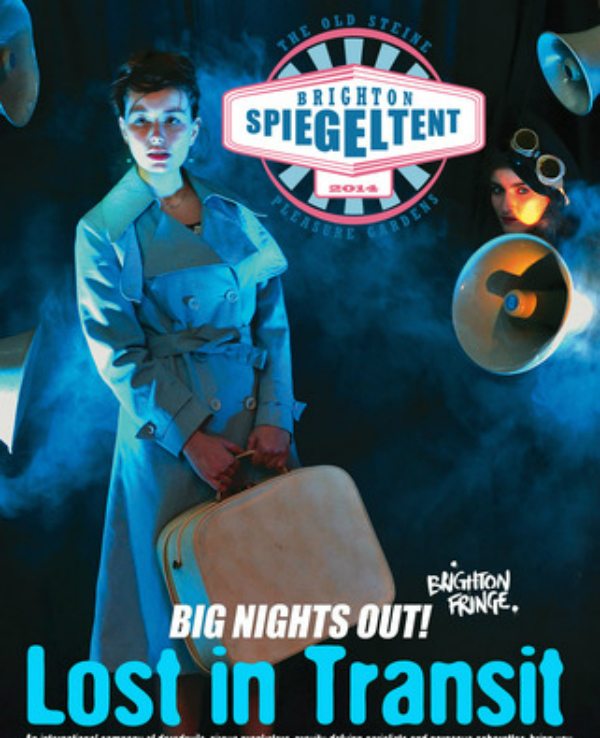 In a cloud of smoke, flashing lights and mechanical noise, a lone girl in a pale blue raincoat emerges into a busy station with a suitcase. She’s on her way somewhere.

This award winning, specially commissioned for the SpiegelTent is a hybrid of theatre, circus and cabaret heavily influenced by the films of Jacques Tati and is great fun. It’s a collection of choreographed clowning routines to retro music with tickets, suitcases and torches which passed the time in an entertaining way. The show is threaded together by the young French lady in her blue raincoat trying to get somewhere and being thwarted by the Kafkaesque employees of the various modes of transport and the menacing clowning Chief Conductor. In between these were set pieces of aerialists, three extremely talented young women all with a different expertise treating us to a concentrated burst of silk rope work, hoop and finally trapeze.

Watch a trailer of the show and an interview with the director:

This set up always works well in the Spiegel tent and it allows you a feeling of real intimacy with the performers who are only a few meters overhead, there were gasps aplenty.  With some very nicely natured interaction with the audience and a charming chanteuse who may or may have not been French but was certainly a breathy engaging singer with more than a hint of Ertha Kitt in her sophisticated vibrato.

There is a warm heart pulsing at the centre of this cabaret-circus that allows the talented international cast to range through comedy, intense theatre and circus skills in a filmic atmosphere. Overall although some of the narrative was lost in transit the show delivered an entertaining evening full of thrills and some moments of delightful oddness that warmed the audience up to a roaring handclapping appreciative finale.

We grabbed a rather scrumptious locally reared lamb burger from an angelic blond lad running the food stall in the SpiegelBar tent who had as saucy a line in tasty patter as his tasty patties were saucy.

I’m still not sure where the young lady was trying to get to though….