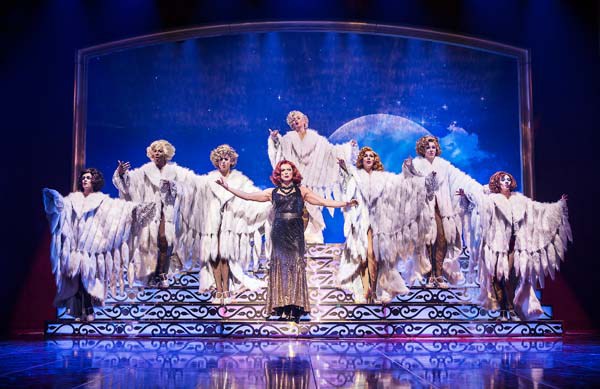 When La Cage Aux Folles opened in 1983 it was very much a ‘piece of its time’ scripted by Harvey Fierstein with music by Jerry Herman and introducing the world to the fabulous Les Cagelles.

Those were the days before we had gay marriage and many of the rights we now enjoy. The musical gave gay people at the time the chance to experience the fabulous illusion created at the La Cage nightclub in Saint-Tropez by middle age drag queen and star of the show Albin (Zsa Zsa) and his partner Georges who together owned the nightclub.

Georges has a straight son, Jean-Michele who falls in love with Anne and decides he wants to marry her, but her father is a right-wing politician who wants to rid France of gay people and the second half of the show is about the chaos caused in bringing the two sets of parents together to meet each other and discuss the wedding.

That is the basic storyline, but the narrative is so much more, touching on issues as varied as love, trust, honesty, loyalty, self-esteem and the politics of the right which ironically this modern revival is being stged during.

80’s heart-throb actor and, star of TJ Hooker and Grease 2 the movie, Adrian Zmed is very reassuring playing Albin’s long suffering lover and business partner Georges, who has the patience of a saint. Georges spends his life accommodating Albin’s ever-increasing demands but deep down loves him dearly. The secret to this show working is that the audience really believe in that relationship, with Mr Zmed rising to those challenges magnificently. I really felt his affection for Albin, loved his mature baritone voice and in Song on the Sand and Look Over There he had two of the finest numbers in the show delivered in true Aznavour style. “He’s an actor who sings rather than a Frank Sinatra-style singer who acts.”

Hard nosed, no-nonsense Jacqueline, owner of one of the most famous restaurants in France, Chez Jacqueline is performed with great aplomb by West End royalty Marti Webb. She plays Jacqueline as one tough no nonsense lady, you can hear it in her voice and she lights up the stage every time she strides on and opens her mouth to sing.

Jacob, the butler who wants to be the maid is cleverly played by Samson Ajewole who looks seven feet tall on stage and unlike the actor in the original film of Cage Aux Folles keeps the visual camp humour on a very tight lead. He is all legs and arms rather than over the top camp which is where his humour come from.

Which brings us to nicely to the star of the show East End actor John Partridge who plays Albin more as the chair of the committee at the Wheeltappers and Shunters Social Club than a glamorous middle-aged drag icon on the French Riviera. His Albin has a thick Northern accent, and he delivers his spoken lines very quickly like a northern comic might do. At times, even though a northerner myself, I struggled to understand him. It is very risky to do this with such an iconic role and all through the show I struggled with the concept. At times it verged on pantomime and on press night a member of the audience actually shouted out “He’s behind you”.

That apart, it was worth going just to hear Mr Partridge sing I am what I am at the end of the first half. His wonderful interpretation and phrasing of the number made me weep real tears and his voice commanded the stage at all times during the evening. His Albin, is a glamorous muscle Mary rather than the middle age, frumpy one I remember from my youth. However, the audience on press night loved Mr Partridge, who is undoubtedly one of the finest leading men of his generation in musical theatre and his performance brought them to their feet.

Memories of institutions like La Cage were and are treasured by gay people today, because they were a safe haven to escape to, creating an imaginary world of fabulousness – while during the day they were left to deal with the discrimination and hatred the outside world threw at them.

With Trump in control in America and the far right rising all over the world we must never forget how fragile our gains are and how important and reassuring the illusion of what La Cage and the Albins’ of this world meant to everyone then and now really is. After all could you imagine Maria in the Sound of Music played with a Northern Accent?