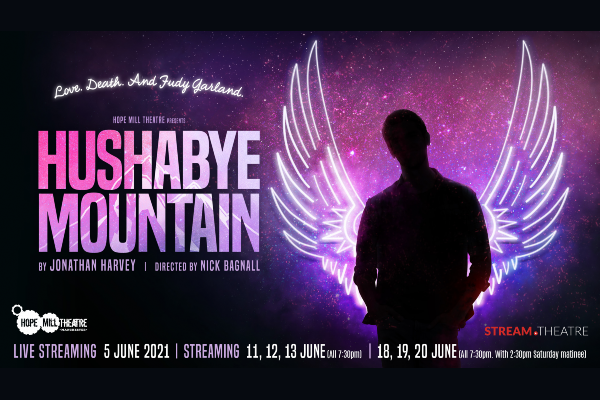 Jonathan Harvey’s iconic AIDS-era play has a terrific revival at this Manchester theatre with a starry cast that bring out the full emotion of the piece.

Danny , ( Nathan Mc Mullen ) a  young , lively  Liverpudlian lad has died  of AIDS in hospital as the play opens. Round his bed are his partner Connor ( Layton Williams ) his best friend Lana( Amy Dunn) and her husband and Connor’s brother Lee ( Matt Henry ).

And this close-knit group are the glue in the play’s episodic  nature which charts in different timescales the ups and downs of their relationships.

And then there’s Ben ( Harrison Scott- Smith ) – the young gardener who Connor gets involved with shortly after Danny’s death, with all the complications of guilt , fear , insecurity and longing that give this wonderful show its very breath .

But Harvey’s joyous skill is to set this realistic story against the fantasy of the after-life.

For Danny gets his feathery angel wings but there are tests to pass to get into Heaven. And the guardian who can help is the keeper of the stars – also known as Judy Garland – brilliantly depicted  by Jodie Prenger.

But that’s not complex enough for Harvey who adds a further layer in that Judy is actually the insane Beryl- Danny’s mother who has disowned him for his Queerness.

As we go through Danny’s progressive  illness , his mother’s frequent letters give us true Harvey one-liners worthy of the Corrie writer’s best.

The whole cast have a chemistry that is palpable – Nathan cute, endearing and tragic; Layton loving, conflicted, resentful and bereft at his loss. Matt Henry is at times deeply unsympathetic but his reconciliation is one of the mot moving scenes  in the play.Harrison is the new cocky boy, who is hard to deal with, and also subject to self-disgust and  self-pity as he turns out to be HIV +.

But to my mind Jodie steals a lot of the show as the blustering, verbally fluent mother who holds the key to her son’s acceptance into Heaven and who even has a little cameo as the Virgin Mary !

It’s a long haul of a play and I think it would benefit from a little editing, but it’s heart-warming, earth shattering stuff, beautifully  and sensitively directed by Nick Bagnall.

You can catch the final 4 streamed performances on 18/19/20 June –  tickets and further information at stream.theatre or hopemilltheatre.co.uk