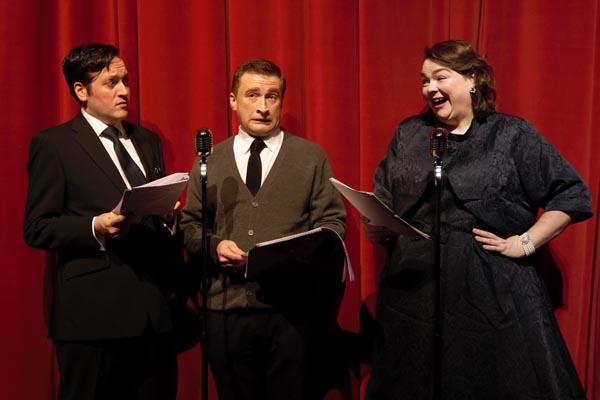 National treasures are very popular. They attract much affection and are timeless if taken out and polished from time to time.

HANCOCK’S Half Hour first fell on radio listener’s ears in 1954 and in that format and later on tv , it ran for over 160 shows. The lugubrious, down-on-his-luck Hancock blazed a trail which owed a lot to Chaplin, Laurel and Hardy and Buster Keaton , but in turn led to a new generation of deadpan comics like Frankie Howard, Jack Dee and Paul Merton.

Apollo Theatre Company has made a name in recent times by recreating some of the old comedy Greats of the airwaves – Round the Horne and the Goon Show – for instance. As always this on-tour and for one night only show has impersonations which are immaculate.

None more so in this show than Colin Elmer as Kenneth Williams in a variety of characterisations from stroppy police sergeant to loud , brash US colonel and unctuous council official.

Shut your eyes and James Hurn IS Tony Hancock, although his physical stage presence is not entirely accurate. Laura Crowhurst as the larger than life, voluptuous and fake posh Griselda Pugh, played on radio and tv by Hattie Jacques looks and sounds 100 per cent the real thing.

Tom Capper doesn’t have a lot to do as the thick Antipodean Bill Kerr but his comic timing is top rate. Ben Craze as the loveable rogue Sid James gets the tone of voice right from his first 2-word opening and is every inch the spiv with a new crooked deal round every corner.

The plots of this series of episodes are largely irrelevant and actually a bit dated, though they all have very clever twists in their final moments.

The fun in the evening is reminding the elderly audience of a golden age of comedy with which they grew up in the capable hands of writers Galton and Simpson.

Hancock’s Half Hour was at the Theatre Royal, Brighton and is on a national tour, including performances in Eastbourne and Horsham.

See www.apollotheatrecompany.com for dates and venues.