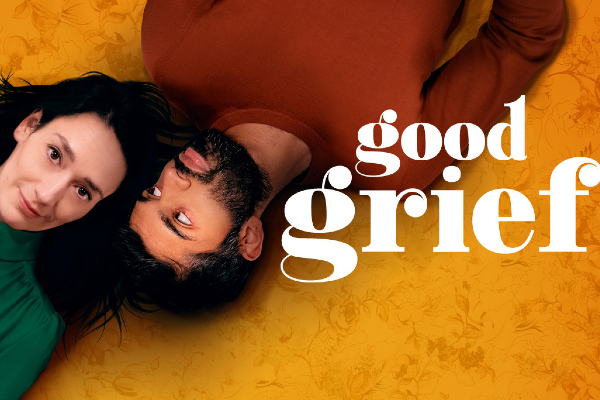 In the last year more of us than normal have come  into contact with the grieving process – either  through friends and family we’ve lost or just the sense of social deprivation  that solitary isolation has brought to us.  We are grieving for someone or for  our past lives of social interaction.

In such a short a space of playing time – 45 minutes –  we get a series of interactions between these two characters across February to October . The grieving process is dissected into its various stages – depression, anger, guilt, panic, together with a wry, sardonic sense of humour, which director Natalie Abrahami brings out with quick-fire dialogue and knowing looks, in a very tight acting space.

At times it’s touching, at others annoying – well at least the characters are annoying – and there’s a gradual healing process with a fairly predictable outcome that’s nonetheless effective due to the engaged and engaging performances of the two actors.

The director also lets us see the Covid – safe scene changes that pepper the action – cleverly filmed in black and white.

Haynes tells us in the  virtual theatre programme: ‘ we will always find a way to tell our stories’ and though some theatre-going regulars may be less than satisfied with the hybrid film/theatre process now being rolled out by many companies, for me it works extremely well – possibly better than it would in a real-life studio space.

Tickets for Good Grief, which is available to stream until 15 April are  at originaltheatreonline.com