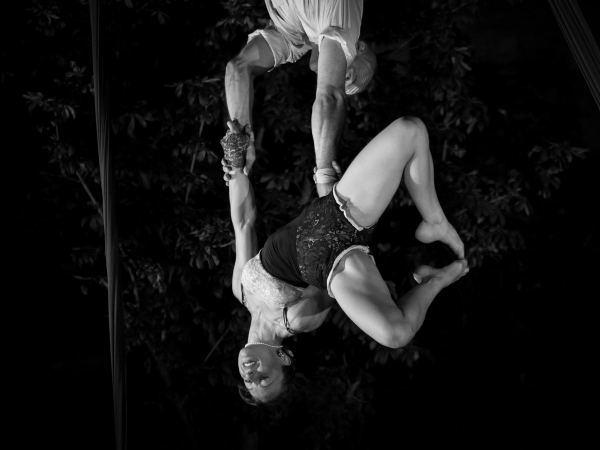 This is very European show in flavour, CircoPitanga  being a Brazilian Duo but with a wide range of cultural influences and although to a Euro audience this would be easy to access and understand this form of stylised gymnastic clowning is not so familiar to a British audience who were slow to warm up, but once a few clever throws and climbs has been accomplished the audience started to understand the narrative flow, and the intention and methodology of these talented performers and what the stylised jesting was leading up to and relaxed and enjoyed themselves.

Passionate about acrobatics, this gifted duo Loïse and Oren; who are CircoPitanga work on a specific technique of portées on a single attachment point.

The influences of different cultural experiences, backgrounds and techniques reflect  the original style of the performances but especially the way the artists recreate emotions through body language in a subtle, poetic and entertaining way, it’s more than just a sophisticated form of clowning, but it’s just as charming to watch. It’s also very funny and there were lots of very visual jokes worked into their routines.

Although slow to start while they established character and story without talking, just with dance, and discovery, shrugs and movements, when they got going this charming pair soon charged up into an astonishingly vibrant and virtuoso performance of aerialist and acrobatic joy. They were wonderful, throwing, jumping, and climbing until they were going so fast it was all we could do to catch our breath into between wows.  This was a well-balanced and electric first night in Brighton by CircoPitanga and we would be welcome the opportunity to see more, and longer, expressions from this different creative team.

They came on afterward to thank the audience and to apologise for their show not being the advertised one; some technical difficulties apparently, so explained they had had to improvise the show up that day. If that’s what they can do with such short notice, I imagine a rehearsed show would bring the house down. An excellent hour of well crafted and seriously impressive skill.