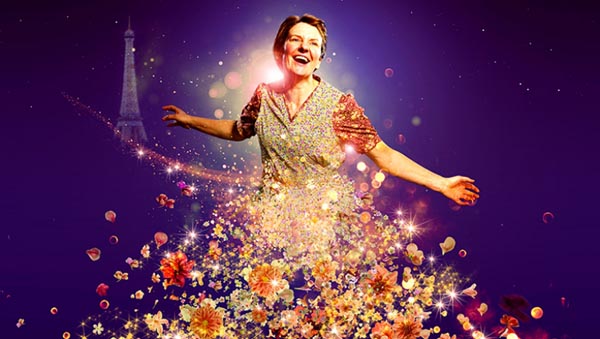 Ada Harris spends her days dusting, darning, polishing and scrubbing. But her first glimpse of a ravishing Christian Dior dress sets her off on a journey that will change her life forever…

FROM the cobbled streets of post-war London to the shimmering avenues of Paris, Ada transforms the lives of everyone she meets along the way; but can she let go of the past and finally allow her own life to blossom?

It’s a pleasure to see the wisdom of the kind-hearted cleaning lady, so often an add-on part being given centre stage. It’s also a pleasure to see another great role for an older woman. Rachel Wagstaff’s delightfully emotive adaption gives us a grim hard reality for the characters’ lives that allows Mrs Harris lighthouse of hope and charm to beam through the murk of austerity. Based on the novel by Paul Gallico this production is minimalist of set but huge of heart and makes great use of the revolving stage.

From the opening scene where Clare Burt’s spectacularly enchanting and entirely authentic Mrs Harris quietly celebrates her anniversary with her husband, until the subtle but devastating twist of her neighbour ‘popping in’ Mrs Butterflied – a magnificent Claire Machin – the stage is set for a show thick with social magic, with positive meddling, with experience winning out over inexperience and bravery over fear. Kindness and compassion pour out of Mrs Harris and slowly permeates the people around her. We see noble moments which brought the whole audience to a thoughtful applause and moments which made this hard-hearted critic well up. Mrs Harris made me cry, full beautiful tears rolled down my cheeks and I was glad.

With some superbly funny performance and a hard, long look at the British class system and its reliance on the hard-working and uncomplaining types of Mrs Harris, this is a musical that’s more than the sum of its parts.

Daniel Evans’ production stars the touch perfect Clare Burt but the supporting cast are just great, each of them giving sharp performances which add real value to the story.

The plot is pretty simple, Mrs ‘arris,  scrubber to the gentry, sees a Dior brochure, spies a dress that transfixes her, and wakes her heart from the slow slumber of grief. So, she decides to have a dress. Dior promises, “Every woman a princess”, and this is the heart of the musical, how hard work, respect and love can transform people in the same way a Dior dress can transform anyone who wears one.

But, Dior is in Paris, Mrs Harris has to go to Paris and thus our narrative gets under way.  It takes years, no fairy godmother for Mrs Harris, (who is just that to everyone else around her), but Ada Harris has to work for five long years to scrape the money together to be able to afford the journey and the dress itself. She scrimps, saves, sacrifices and struggles to get the money she needs. No magic here, just grim reality, but the hope which leads her on is beautifully realised in each and every extra chore she takes on to earn the money.

The second half is set in Paris, a mirror image of London, with a social order reversed, in close up and played with style and humour the doubling up of the cast is simply lovely and we, once again see Mrs Harris’s experience with people paying off in the interventions she makes in their lives. Small nudges, nuggets of truth, huge heartfelt generosity, it’s pitched perfectly. There’s a fair bit in French, with no subtitles but somehow this just seems to add to the delights, giving us Mrs Harris perspective and allowing the true motivations of the characters to shine past their fluid Parisian chatter. The scenes of the Dior show are elegant and we float around in the salon with divine dresses shown before us, Mrs Harris lost in deep appreciation of the aesthetics of the dress, shared with us in a lovely duet.

Ah the tears, they rolled down my cheeks and I adored Mrs Harris’s fairy tale, I tried to ignore the voice in my head which bleated on about reality and how Mrs Harris would never have got to Paris, that her hard work would have brought her very little but an early death and further exploitation, but hey this is Chichester and the moon was silvery.

At its core it’s a Thatcherite fairy tale but at heart it’s beautifully pitched and sung. There’s no real stand out song or singer, but a constant weaving of voice, narrative and music leading us onwards and upwards. It’s an emotionally subtle piece of work, the music working as hard to move us as the actors on stage, and when it comes together there’s no stopping it, it’s a triumph of hope over reality.

Every good deed comes back tenfold on Mrs Harris, the twists and turns of adversity only go to prove her triumphant opinion of the world, and for someone who claims to have ‘everything she needs right here’ she goes a long way to find something she never seems to miss.

I loved Mrs Harris, every single moment of it, it was warm and charming, made me smile and cry, I floated away into her charming narrative and lost a few hours in the auditorium of the Chichester Festival Theatre being utterly entertained.

Sure, it’s unbelievable with a deeply suspect sotto voice narrative, but as a musical study of the power and poignancy of positive interventions, hope over adversity and the urgent need for simple beauty in our lives each day, it’s a triumph.