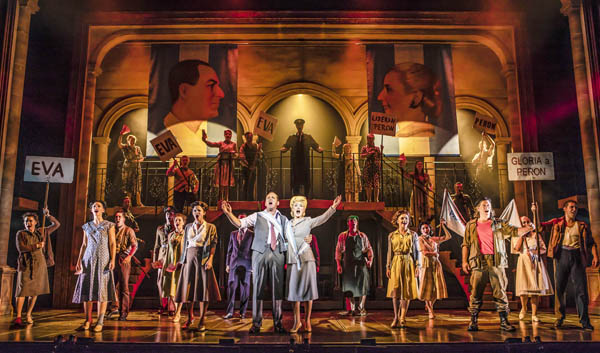 Lucy O’ Byrne, who already has the Sound of Music and Les Mis principal roles to her credit as well as being runner-up in the TV talent show The Voice, is a very bright light in the musical theatre heavens as the manipulative Eva Peron.

Her voice is stridently bright and strong in the big numbers like Don’t Cry for Me Argentina, but she also can tone and slow everything down when Eva’s frailty and pathetic decline towards death requires it. She is absolutely stunning throughout.

And she’s matched by a very strong performance by Glenn Carter as the increasingly cynical narrator Che Guevara. He manages the tricky rock opera style of singing with ease and obvious enjoyment.

Fabulous too is Mike Sterling as Peron, a steely manipulator who is genuinely besotted by the rising star Eva. There is a great chemistry between the two – nowhere more so than in the closing scenes at her hospital bed, and the strangely haunting song You Must Love Me.

Not a foot goes wrong in this sung-through fast-moving production, thanks largely to the brilliant choreography of Bill Deamer, with its fluid, camp and audaciously balletic movements. The ensemble, rise to the challenge and when they are at their strongest as in A New Argentina, they both sing and dance magically.

It’s necessarily a smaller scale production than a large West End stage would allow, but the 11 piece band, under the direction of Ross Johnson, rises to the challenge of Lloyd Webber’s soaring music, and the staging, sometimes a little restricted on this stager, makes full use of the space available, despite the presence of a huge double staircase and the inevitable balcony.

Touring shows tend not to get national attention or awards, but this show surely deserves them.

If Lucy doesn’t end up as Christine in Phantom of the Opera, there is no justice in the world. She would be terrific in the role.

Evita runs at the Theatre Royal, Brighton, until Saturday November 3.