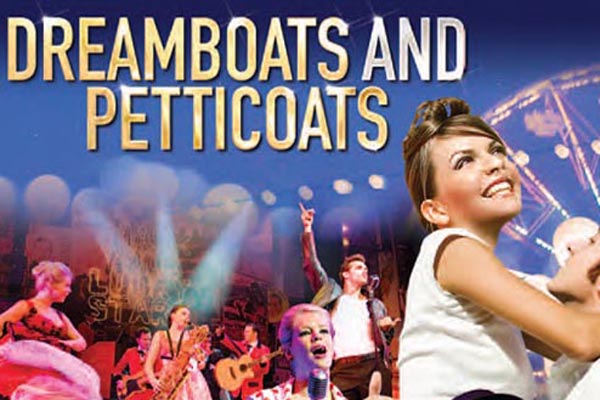 Inspired by a multi-million-selling series of albums, Dreamboats And Petticoats breezed into Brighton on a wet Monday evening and managed to send the audience away from The Theatre Royal very content and humming numbers from the golden age of rock and roll, 1956-62.

A jukebox musical crammed packed with memorable tunes, this feel good show which I was seeing for the first time was really uplifting and gave me a very memorable night out.

The storyline is classic boy meets girl love story with a little wobble in the middle while the boy thinks the grass is greener somewhere else. Bobby and Laura, enter a national song writing competition and win it with their entry Dreamboats and Petticoats.

The rest of the show is an excuse to pack in as many numbers from this golden rock and roll era as possible including Lets Dance, Dream Baby Dream, Bobby’s Girl, Do You Wanna Dance and Lets Twist Again to mention a few. You barely get the chance to appreciate one classic number and another comes along like an express train.

Bob Tomson’s direction keeps the at times meandering storyline moving along at breakneck speed while Carole Todd’s choreography is precise, effective, very much of the era and lovely to watch.

Very much an ensemble piece for seven lead performers, special mention for Bobby played by Alistair Higgins who has a fine vocal range, a great voice and plays vulnerable very effectively while Laura, played by Elizabeth Carter plays his love interest to victim perfection. She has a lovely voice and keep the audience on side all evening. Alastair Hill playing Norman has more than a passing resemblance to Billy Fury and certainly knows how to move his hips.

While this tour is coming to the end of its current run all the cast performed with great enthusiasm, the performance felt fresh and energetic and the musicians were really impressive.

The mega mix at the end was the icing on the cake of a wonderful evening out at the theatre and had the ageing audience up on their feet dancing.

Dreamboats And Petticoats plays at the Theatre Royal until Saturday, October 7.