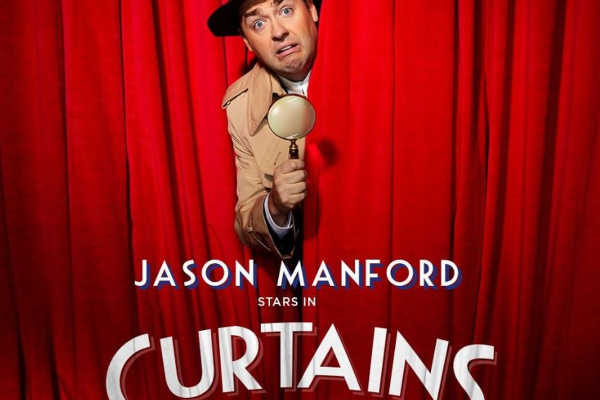 The genius of Kander and Ebb is well-known from their hits Cabaret and Chicago . This , their final collaboration, is no Fosse-infused spectacle . Curtains is a carefully crafted witty piece of  whimsy – a musical whodunnit which is really about the joys and miseries of putting  on a show.

Almost immediately a leading lady is murdered with a cyanide capsule taking what turns out to be her final bow during a  try-out in Boston pre-Broadway.

The show within this show is a dubious cowboy musical based loosely on the tale of Robin Hood, and while the cast are busy murdering the music, someone is trying to murder them.

Enter stage right the detective, the loveable smiley Lieut Cioffi played with obvious enjoyment by Jason Manford. But the cop has a second string  to his bow – as an amateur drama actor/singer and he puts as much effort into solving the problems with Robin Hood as he does into finding the murderer.

This is problematical as we end up with 3 murders plus other attempts and the plot is further complicated by a love interest between Cioffi and the leading lady’s understudy Niki , who Cioffi reminds her, is also a suspect.

Niki is beautifully sung and acted by Leah West and she’s a perfect ingenue foil to the worldly Cioffi.

The show is peppered with bouncy and hauntingly beautiful tunes , where Kander and Ebb cleverly mix romance with the joy of creating musical theatre – nowhere more evident than in the laconic singing of Andy Coxon as the composer Aaron Fox , pining for his lyricist and ex – Georgia Hendricks, played flawlessly by Carley Stinson.

But this is no one-man show. Rebecca Lock is outstanding as a feisty , hard-headed producer whose first interest is the business part of show business. With a Merman-sized voice and personality Rebecca often steals the show.

Samuel Holmes is delicious as the camp queen of a director, never short of a cutting riposte and Alan Burkitt and Emma Caffrey stop the show with a breath-taking Apache dance, worthy of more than Robin Hood can offer. In the end the murderer – or rather two murderers are revealed, but you’ll have to go see it to find out whodunnit.

Curtains is on tour and was seen at the Alexandra Theatre, Birmingham.

It plays a Christmas season at London’s Wyndhams Theatre from 13 December.