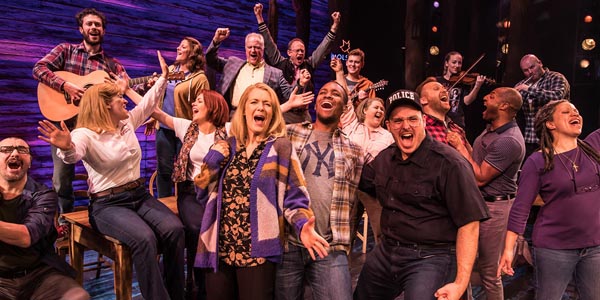 Among our indelible memories of 9/11 are undoubtedly the fall of the Twin Towers, the heroism of the NYC firefighters and the resilient spirit of the city’s residents and visitors.

BUT in far-off Gander, Newfoundland, there was a different manifestation of the goodness of the human spirit. That day when the US airspace was closed, some 200 planes were diverted to a little known airport “on a rock in the sea” in Canada.

Come from Away is a staggeringly beautiful , resonant and life-enhancing musical based on real-life testimony of both stranded passengers and crew and the residents of Gander , whose population grew from 9,000 to 16,000 in just one fateful day.

From its high energy opening number Welcome to the Rock, the hit Broadway show, written by Irene Sankoff and David Hein, makes us laugh and cry in equal measure but is never for one second sentimental or blindly optimistic.

With songs and dances in a punchy, bouncy Gaelic rock style, it takes us into the lives of ordinary and yet extraordinary people .

Carter is jovial, firm, harassed, compassionate and down to earth. Tucker is resilient, determined and yet shattered by her 9/11 experiences. Her song Me and the Sky is a high point in this 100 minutes of inventive, lively and thought-provoking entertainment.

And it’s no straightforward biopic or rosy view of humanity. There is fear, anger, mistrust and misinformation – just like everywhere else in life.

But what the cast of 12 pulls off is something quite magical. We meet Catholic, Muslim, Jew and non-believers rubbing on alongside each other – the local cop, bartender, college principal and rooky TV reporter on her first assignment – and we grasp that real drama can be found in the most mundane places.

Director Christopher Ashley keeps the cast at a frighteningly high-speed momentum and MD Alan Berry gets a variety of sounds and moods from his fellow 7 musicians. Our toes are tapping throughout.

Musicals based on real-life events tend to have a short shelf life, fading with the passing memories of the audience.

9/11 is clearly not in that mould, and I’m guessing that in 20 years, somewhere they’ll still be singing Welcome to the Rock.

Come from Away is at the Phoenix Theatre, London, booking through till September.